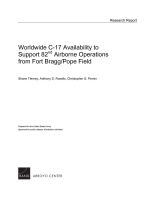 This report explores C-17 availability and determines how quickly these aircraft and their aircrews can reach Fort Bragg/Pope Field, where the 82nd Airborne Division, a large provider and the highest headquarters of the Global Response Force, operates, from the many locations they are deployed to worldwide. Historical data on C-17 availability and individual aircraft locations over a full year were analyzed to determine how quickly C-17s could be ready to depart Fort Bragg/Pope Field airlifting the Global Response Force. RAND's analysis showed that roughly half of the C-17 fleet (104 airplanes) were fully mission capable (FMC) at any point in time, with the number fluctuating from as low as 68 aircraft to as high as 126 at periods throughout the year of data analyzed. Assuming that aircraft were not diverted from in-progress sorties and that crews were allowed to rest as required, all these FMC aircraft could be ready to redeploy from Fort Bragg/Pope Field within 87 hours of a request for their services with smaller groups available sooner. On average, 1–2 aircraft could be made available within 12 hours, and 35 aircraft could be made available within 24 hours.

On Average, Around 50 Percent of the C-17 Fleet, or 104 Aircraft, Are Fully Mission Capable at Any Time

This research was sponsored by US Army Forces Command and conducted by the Force Development and Technology Program within the RAND Arroyo Center.