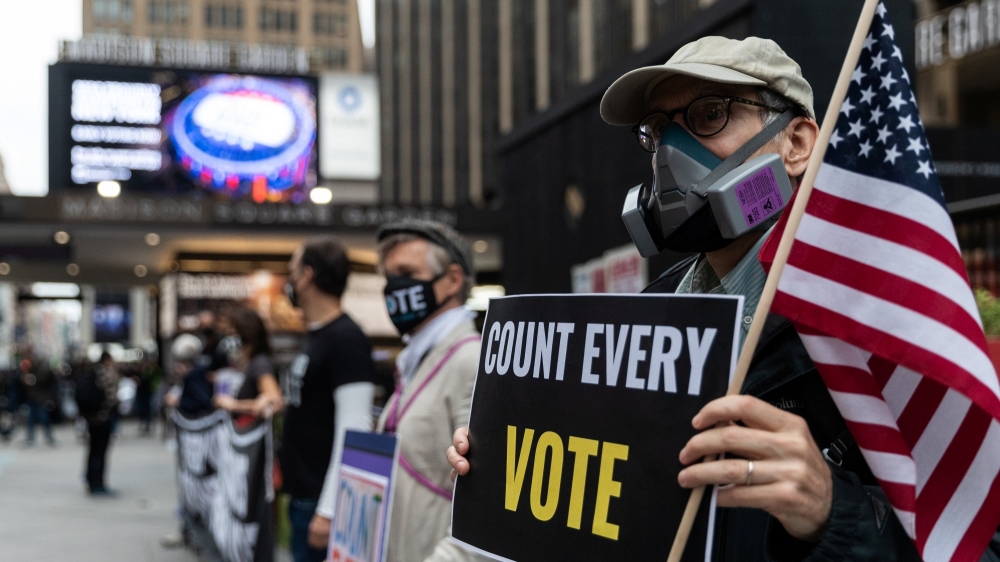 A man wearing a protective mask due to COVID-19 pandemic holds a sign outside Madison Square Garden, which is used as a polling station, on the first day of early voting in Manhattan, New York, October 24, 2020

For our recent report, Attitudes on Voting in 2020 (Kavanagh, Gibson, and Hodgson, 2020), we conducted a survey of nearly 2,400 respondents across the country and found that a majority of Americans expected that they would be able to vote safely in the fall (which we refer to as perception of safety) and that their vote would be counted (perception of integrity)—but we also found that many people were unsure on both dimensions.[1] In August, we asked a subsample of 1,841 of the original respondents about public expectations of election safety and integrity and compared the results to see how attitudes had changed between May and August 2020. This report summarizes our findings.[2]

Fewer Americans Expect Their Votes to Be Counted Correctly; More Are Uncertain

Figures 1a and 1b compare the May and August responses of the reduced sample. At this aggregate level, we observe small changes, including a slight decline in expectations of safety and a drop in the percentage of respondents who expect their vote to be counted correctly.[3]

Fewer expected to be safe from threats to their physical health when voting.

The percentage of people reporting an expectation of safety fell slightly from 62 percent of the reduced sample in May to 60 percent in August, a statistically significant drop. We find no change in uncertainty and a 1-percent increase in the number of people saying that they did not expect to be safe from threats to physical health.[4]

Fewer expected their vote to be counted accurately, and many remained uncertain on this topic.

As the election draws closer (and as voters get more information both about how their jurisdiction is preparing and about the spread and risks of COVID-19), one might expect the overall level of uncertainty to decline as voters become more certain about what they will encounter in the November 2020 election. But that is not what we observe. Instead, we see the level of uncertainty holding steady for whether voting in person would be safe and rising about whether an individual's vote would be counted correctly. Importantly, the fact that only slightly more than one-half of respondents expect their vote to be counted correctly in our survey suggests that voters have continuing questions about the integrity of the 2020 election.

There are several factors that might explain the increased level of uncertainty as the election draws near. First, although there is now more information available about the risks of COVID-19, uncertainty about its continued spread over the final weeks leading up to the election has remained high. Second, respondents might not know what local officials are doing to make in-person voting safe and might be struggling to decipher conflicting information from public figures on the relative safety of polling places. Relating to the issue of whether votes will be counted correctly, increasing uncertainty could stem from concerns about the ability of the U.S. Postal Service to handle an increased volume of mail-in ballots and about the vulnerability of mail-in voting to fraud—though there is little evidence to support claims of widespread fraud through in-person or by-mail options (Goel et al., 2020; Minnite and Callahan, 2003; Reality Check Team, 2020; Stein, 2013).

Importantly, our results for this question of whether respondents expect their votes to be counted accurately are comparable with those of a series of Pew Research Center surveys that asked a similar question in 2004, 2008, and 2016.[5] Direct comparison is difficult because of different response options, but our 2020 results seem to indicate that respondent expectations that their votes will be counted accurately are slightly higher than those that Pew reported for 2016—but somewhat lower than those that Pew reported for 2004 and 2008. Our results on questions about expectations of accurate vote count and expectations of physical safety at the polls are, in broad terms, also comparable with their 2020 results. Once again, however, direct comparisons are difficult because Pew offered different response options and because Pew asked separate questions about the expected accuracy of the count of mail-in ballots and of ballots cast in person (Fingerhut, 2016; Pew Research Center, 2020.).

Aggregate trends can disguise underlying changes at the individual level. When we investigate changing attitudes at this microlevel, we find several changes in respondent attitudes.

Regarding integrity, we observe the following:

Regarding questions of election safety in the wake of the pandemic, we observe that about one-third of respondents changed their minds between May and August; the remainder reported the same expectations. These trends are not dissimilar from those observed for integrity, with the most notable shifts being those toward increased uncertainty among those who expressed an expectation of safety in May. We find the following:

Across our analyses of perceptions of safety and integrity, we can say that, despite stability in expectations among the majority of respondents, we still see a good amount of churn among about one-third of respondents. The most-notable trends are toward increasing uncertainty. We observe this trends for respondents who reported in May that they expected safety and among all respondents on questions of whether respondent votes will be counted correctly.

Who Changed Their Minds?

Finally, we explored whether those who changed their responses between May and August on safety and integrity shared any specific characteristics—put another way, whether particular types of voters are shifting from expecting safety and integrity to being uncertain or the reverse. We explored individual characteristics that appeared to be associated with the likelihood that individuals would change their minds.[6]

Tables 1 and 2 show the characteristics associated with different changes in attitudes. We do not consider every change but instead look at some of the most-common attitude changes.

Regarding the question of whether the respondent's vote will be accurately counted, we found that race was the most significant predictor of changes in attitude.

Regarding the question of safety, we found a wider set of characteristics that appear to be associated with whether and how respondents change their minds.

Overall, our comparisons of the May and August surveys suggest general stability in attitudes with some change among about one-third of respondents. Regarding perceptions of safety, the most notable trend is a small shift among respondents who in May expected safety in voting but expressed uncertainty in August. Regarding the question of whether the respondent's vote will be accurately counted, the trend toward more uncertainty exists across respondents. Both the general stability and the trend toward uncertainty among some groups make sense when considering continued questions about the trajectory of COVID-19 and the ongoing debate at the national level about how best to execute safe and secure elections in November. When we look at who is most likely to change their minds, we find that non-White respondents are more likely to remain in or shift to the "unsure" group for both safety and integrity. White respondents appear to have shifted somewhat toward more-positive expectations about integrity. Regarding the question of safety, Republicans are most likely to retain the positive expectations that they expressed in May, with older and more-educated voters more likely to express more-positive safety and integrity expectations.

Although the August survey is closer to the election than the May survey, we expect that, with two months to go at the time of the survey, additional change has occurred and uncertainty could remain high right up to Election Day.

In this report, we consider the perceptions of 1,841 survey respondents about the safety and integrity of elections in November 2020. We consider how respondent attitudes changed between May and August 2020 and which populations are more or less likely to have updated their expectations about (1) physical safety and (2) whether their votes will be counted accurately, given the pandemic context. The data used in this report come from a RAND Corporation American Life Panel survey conducted in August 2020.

We appreciate the support of Michael D. Rich, Terrence Kelly, Henry H. Willis, Jordan R. Fischbach, Matthew D. Baird, Erica Robles, and Steph Bingley. We are also grateful for feedback from our reviewers, Brian Michael Jenkins and Michael S. Pollard. Their contributions significantly improved the report. We thank Arwen Bicknell for her expert editorial assistance on this report. We also appreciate the efforts of Beth Bernstein and Jeremy Rawitch in the publication process.

This report is part of RAND's Countering Truth Decay initiative, which is focused on restoring the role of facts, data, and analysis in U.S. political and civil discourse and the policymaking process. The original 2018 report, Truth Decay: An Initial Exploration of the Diminishing Role of Facts and Analysis in American Public Life, by Jennifer Kavanagh and Michael D. Rich, laid out a research agenda for studying and developing solutions to the Truth Decay challenge. Truth Decay worsens when individuals lose trust in institutions that could serve as sources of factual information. Legitimate and safe elections can be a first step toward building and maintaining a government that people trust. This report considers public perceptions of the safety and integrity of elections in pandemic conditions and their views of local preparedness for the elections.

Funding for RAND's Countering Truth Decay initiative is provided by gifts from RAND supporters and income from operations. RAND would like to recognize the Joel and Joanne Mogy Truth Decay Fellowship, established by the Mogys in 2020 to support research on Truth Decay, civics, and democracy. The authors drew from the Mogys' generous gift to fund this project.