The authors of this report estimate the proportion of all sexually assaulted military service members who identify as lesbian, gay, or bisexual, or who do not indicate they identify as heterosexual. They find that although this group makes up only 12 percent of the active duty population, it accounted for approximately 43 percent of all sexually assaulted service members in 2018. 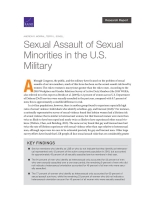 Sexual Assault of Sexual Minorities in the U.S. Military

Much of the focus of research on sexual assault in the military has been on the risk faced by women. However, in civilian populations, individuals who identify as lesbian, gay, and bisexual (LGB) are known to be at especially high risk for sexual assault.

In this report, RAND researchers examine evidence from the 2016 and 2018 Workplace and Gender Relations Survey of Active Duty Members (WGRA) survey to estimate the proportion of military sexual assaults that are against LGB service members and others who do not describe themselves as identifying as heterosexual. They find that assaults on the minority of service members who do not describe themselves as heterosexual constitute almost half of the military's sexual assault numbers. The authors discuss sexual assault risks for these individuals and recommend modifying prevention programs to better address a large and previously unquantified proportion of all military sexual assaults.

Funding for this research was provided by gifts from RAND supporters and income from operations. The research was conducted within the Forces and Resources Policy Center of the RAND National Security Research Division.