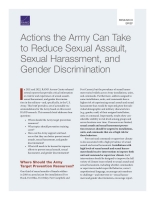 In 2021 and 2022, RAND Arroyo Center released several reports that provide critical information on risk for and experiences of sexual assault, sexual harassment, and gender discrimination in the military—and, specifically, in the U.S. Army. This brief provides a set of actionable recommendations for the Army based on this recent RAND research. This research brief addresses four questions:

Where Should the Army Target Prevention Resources?

What Topics Should Prevention Training Cover?

Such behaviors as offensive and persistent sexual jokes and unwanted, upsetting discussions about sex are among the most common types of sexual harassment behaviors experienced by both male and female soldiers, and these behaviors should be emphasized in prevention training. Training should also include gender discrimination,[1] which is one of the most common problems experienced by women in the Army, along with other common types of sexual harassment, such as repeated attempts to establish an unwanted romantic or sexual relationship, insults related to men's masculinity or gender expression, and sexual comments about soldiers' appearances or bodies. Training should emphasize that the overwhelming majority of sexual harassment and gender discrimination in the Army occurs at soldiers' places of duty, during the duty day, and is typically reported to occur more than once.

How Can the Army Support Unit Leaders so That They Can Better Prevent Sexual Assault, Sexual Harassment, and Gender Discrimination?

Commanders should be provided with sexual assault and sexual harassment risk reports to warn them of known problems within their commands and allow them to identify, monitor, and address problems quickly. Although it is difficult to construct indicators for future sexual assault and sexual harassment, the risk of experiencing these behaviors within installations, units, and commands tends to be stable over time. These risk reports should differ from those that already exist (e.g., the Defense Equal Opportunity Management Institute Organizational Climate Survey) and may require new data-collection efforts to provide data that are as contemporary as possible. Therefore, these risk reports should help commanders understand

Finally, these risk reports should help commanders locate resources available to help them in developing a response to elevated levels of risk of sexual assault or sexual harassment and climates or cultures conducive to such behaviors.

What Still Needs to Be Learned to Improve Prevention Efforts in the Army?

How Do the Experiences of Sexual Minority Soldiers Differ from Those of Heterosexual Soldiers?

Approximately four in ten sexual assault victims (across service branches) do not self-identify as heterosexual, and any program attempting to substantially lower rates of sexual assault will need to address this specific class of assaults. Although prior work has documented several ways in which the sexual assault experiences of sexual minorities differ from those of heterosexual victims in the military, there is very little research on sexual minorities' other experiences, including discrimination and harassment and other types of mistreatment, or whether they face adverse career outcomes, such as slower promotion or lower retention. Such research is extremely limited because sexual orientation cannot currently be tracked as a demographic characteristic in U.S. Department of Defense (DoD) administrative databases. Therefore, sexual orientation should be treated as a standard demographic characteristic in DoD databases to enable researchers to track whether sexual minorities have an elevated risk of experiencing forms of mistreatment in addition to sexual assault and sexual harassment. However, following this recommendation will require a policy change at the DoD level, and it is important to consider how to implement that policy in a way that minimizes unintended negative consequences of disclosure.

Who Are the Perpetrators of Sexual Assault, Sexual Harassment, and Gender Discrimination?

A very basic description of perpetrators of sexual assault, sexual harassment, and gender discrimination in the Army is known: They are most often male enlisted soldiers who are peers of the victims. However, detailed information about the perpetrators remains unknown, which makes it difficult to target prevention efforts at potential perpetrators. More research is needed on the risk factors for perpetration of sexual assault, sexual harassment, and gender discrimination to improve the targeting of prevention efforts. This recommendation aligns with the recommendations of the Independent Review Commission on Sexual Assault in the Military made in 2021.