Using data from the 2016 and 2018 Workplace and Gender Relations Survey of Active Duty Members, RAND researchers produced descriptions of the circumstances surrounding soldiers' self-identified most serious sexual assault experiences. The authors provide information on which sexual assault behaviors occurred, characteristics of perpetrators, and the times and places the experiences occurred. 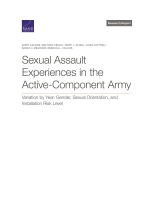 To better understand the circumstances surrounding sexual assault in the Army, RAND Arroyo Center researchers created descriptions of active-component soldiers' most serious sexual assault experiences using data from the 2016 and 2018 Workplace and Gender Relations Survey of Active Duty Members. In this report, researchers describe the most common types of behaviors that occurred, characteristics of alleged perpetrators, and times and places in which the experiences occurred. They also explore differences by gender, sexual orientation, and installation risk level.

Nearly 90 percent of victims believed that the assault was committed for a sexual reason, and more than half indicated that the assault was meant to be abusive or humiliating. The typical perpetrator of victims' most serious sexual assault experiences was a male enlisted member of the military acting alone. Perpetrators were most often a military peer of the victim; perpetrators who were strangers to the victim were uncommon; and assaults by spouses, significant others, or family members were comparatively rare. Approximately two-thirds of victims' most serious experience of sexual assault occurred at a military installation.

The authors found substantial differences by gender, especially in terms of the types of sexual assault behaviors victims experienced and in terms of the setting in which victims were sexually assaulted. The authors also found some evidence suggesting that sexual minorities—that is, individuals who identify with a sexual orientation other than heterosexual—may experience more-violent sexual assaults and more assaults that are meant to abuse, humiliate, haze, or bully, especially among men.

The research described in this report was sponsored by the United States Army and conducted by the Personnel, Training, and Health Program within RAND Arroyo Center.