Researchers extended previous RAND analyses that produced estimates of sexual assault risk and sexual harassment risk across installations and commands. The results of these extended analyses showed considerable variation in the risk of sexual assault and sexual harassment across groups of soldiers, primarily among Army women—at installations, commands, and in career fields—and identified characteristics of groups in which risk level was higher. 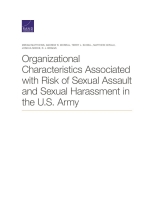 Organizational Characteristics Associated with Risk of Sexual Assault and Sexual Harassment in the U.S. Army

One question is whether groups with higher risk estimates simply have soldiers assigned to them who are at higher risk because of their individual characteristics (e.g., younger, unmarried), or whether personnel in those groups would experience lower risk if stationed elsewhere. To evaluate this, researchers calculated adjusted risk: This measures how much higher or lower than expected the risk of sexual assault is for a group of soldiers. Army women at Fort Hood had an adjusted sexual assault risk of 1.7 percent during 2018, indicating that their risk was 1.7 percent higher than expected based on the characteristics of women assigned there.

By examining adjusted sexual assault risk, the authors were able to estimate the extent to which personnel assigned to certain groups of soldiers might have higher or lower risk if assigned elsewhere

This research was sponsored by the United States Army and conducted by the Personnel, Training, and Health Program within the RAND Arroyo Center.