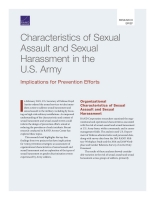 Characteristics of Sexual Assault and Sexual Harassment in the U.S. Army

In February 2021, U.S. Secretary of Defense Lloyd Austin ordered the armed services to take immediate action to address sexual harassment and sexual assault in the military, including by focusing on high-risk military installations. An improved understanding of the characteristics and context of sexual harassment and sexual assault events could inform the design of prevention efforts aimed at reducing the prevalence of such incidents. Recent research conducted in RAND Arroyo Center has explored these topics.

This research brief highlights the top-line findings from two projects that have implications for Army prevention strategies: an assessment of organizational characteristics of sexual assault and sexual harassment and an exploration of the types of sexual harassment or gender discrimination events experienced by Army soldiers.

RAND Corporation researchers examined the organizational and operational characteristics associated with the risk of sexual assault and sexual harassment at U.S. Army bases, within commands, and in career management fields. The analysis used U.S. Department of Defense administrative and personnel data, along with survey data from the 2014 RAND Military Workplace Study and the 2016 and 2018 Workplace and Gender Relations Survey of Active Duty Personnel.

The results of these analyses showed considerable variation in the risk of sexual assault and sexual harassment across groups of soldiers, primarily among Army women. More specifically, the principal findings showed the following:

In the second research effort, RAND researchers developed profiles of active-component soldiers' self-reported most serious experiences of sexual harassment or gender discrimination. The profiles, which we developed using data from the 2018 Workplace and Gender Relations Survey of Active Duty Personnel, describe the types of behaviors that occurred, characteristics of (alleged) perpetrators, and the time(s) and place(s) in which the experiences occurred.

The results identify types of sexual harassment and gender discrimination experiences that are similar for men and women, circumstances in which these experiences are different, and whether the types of incidents are markedly different for soldiers who are stationed at high-risk installations. More specifically, researchers found the following:

Sexual harassment and gender discrimination prevention training materials should emphasize the most common behaviors and scenarios that service members experience outlined by this research: gender discrimination (especially among women); persistent and offensive discussions of and jokes about sex in the workplace (among both women and men); repeated attempts to establish an unwanted romantic or sexual relationship (among women); and insults related to men's masculinity, sexual orientation, or gender expression. Prevention efforts also should focus on the workplace as the setting for sexual harassment and gender discrimination events.

However, the data suggest that there is no need to tailor the content of training materials for the prevention of sexual harassment and gender discrimination for each individual installation. This conclusion is not meant to imply that all aspects of prevention approaches should be one-size-fits-all. As the results of the previous project indicated, targeting prevention efforts at specific installations using risk, career field, or such characteristics as climate could have a measurable effect on overall prevalence rates for sexual harassment and sexual assault.

Thus, it is possible to target prevention efforts using different risk characteristics but still use the same training content insofar as it focuses on types of behaviors that are common across all installations, regardless of risk.