This report describes the most common types of behaviors that occur during active-component soldiers' most serious sexual harassment and gender discrimination experiences, characteristics of (alleged) perpetrators, most common times and places in which these events occur, and differences between high-risk and non–high-risk installations. 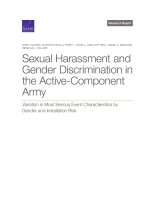 Sexual Harassment and Gender Discrimination in the Active-Component Army

Variation in Most Serious Event Characteristics by Gender and Installation Risk

Men's and women's experiences of harassment and discrimination in the Army share some common characteristics, but the behaviors experienced are different

The research described in this report was sponsored by the Office of the Deputy Chief of Staff, G-1, U.S. Army and conducted by the Personnel, Training, and Health Program within the RAND Arroyo Center.