The authors examine evidence on the effectiveness of campaigns to influence public opinion in target populations — sometimes referred to as "information warfare" — in the context of strategic competition between the United States and Russia, and they provide recommendations for how the United States can maximize the effectiveness of its public communications in competition with Russia. 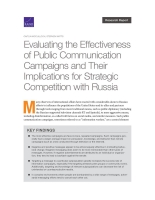 Does not include Appendix B.

Russian efforts to influence the populations of the United States and its allies and partners — including such aggressive means as disinformation campaigns and social media "troll farms" — are a central element of the strategic competition taking place between the United States and Russia. Both countries use public communication campaigns, sometimes referred to as "information warfare," to try to gain advantage over the other. But how effective are these efforts?

The research described in this report was sponsored by the U.S. Army Special Operations Command and conducted within Strategy, Doctrine, and Resources Program within the RAND Arroyo Center.