This report investigates how the Office of Border Patrol could employ pattern and trend analysis and systematic randomness to increase interdiction rates and mitigate smuggler adaptation. The analysis shows how approaches that combine the techniques yield higher interdiction rates than approaches using either technique alone, and it examines the circumstances in which combined approaches are competitive with perfect surveillance. 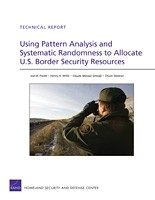 The U.S. Department of Homeland Security is responsible for protecting U.S. borders against terrorist threats, criminal endeavors, illegal immigration, and contraband. Unfortunately, due to budgetary and other resource constraints, it cannot "see and be" everywhere at once. In response, the Office of Border Patrol (OBP) is investigating how pattern and trend analysis and systematic randomness can be used to position border security personnel and equipment in the places and at the times they will be most effective. A RAND study examined how these techniques affect interdiction rates, incorporating results from a RAND-developed agent-based simulation model of the interaction of border patrol agents and illegal smugglers. The model allowed an exploration of how interdiction rates differ across thousands of scenarios that vary by the number of patrols, the rate of illegal flow, the size of the border, and the approach OBP takes to using pattern and trend analysis and systematic randomness. The analysis shows how approaches that combine these two techniques yield higher interdiction rates than approaches using either technique alone, and it identifies circumstances in which combined approaches are competitive with perfect surveillance.

Regardless of Strategy, Interdiction Rates Are Better Explained by Relative Measures Rather Than by Absolute Measures