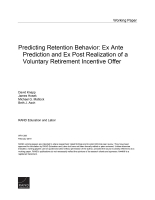 Many public organizations face large unfunded pension liabilities and rising accrual charges. One way to free budget funds to pay accrual charges is to induce the early retirement of senior workers and replace them with junior workers. To do this, the Chicago Public School (CPS) system offered a voluntary retirement incentive (VRI) for teacher early retirement, with the proviso that it would not be implemented unless at least 1,500 teachers signed up for it. We estimated a dynamic structural model of CPS teacher retention and made ex ante predictions of the number of teachers willing to take the VRI and the VRI policy cost relative to the baseline of no VRI. We predicted that the VRI offer of $1,500 per year of CPS service, agreed on with the teacher union, would not reach the target of 1,500 retirees. We also predicted retirement responsiveness and cost under more generous, hypothetical VRI offers. When too few teachers signed up, the VRI offer was rescinded, allowing comparison of ex post outcomes to ex ante model predictions. The model accurately predicted the pattern of take rates by age and year of service, but under-predicted the overall take rate. We discuss reasons for this, including circumstances coinciding with the VRI offer. The structural model proved to be an effective means for analyzing novel policies where historical evidence was not available, nor experimentation possible, however, ex post comparisons also suggest the importance of contextual factors in determining outcomes.

The research described in this report was conducted by RAND Education and Labor.