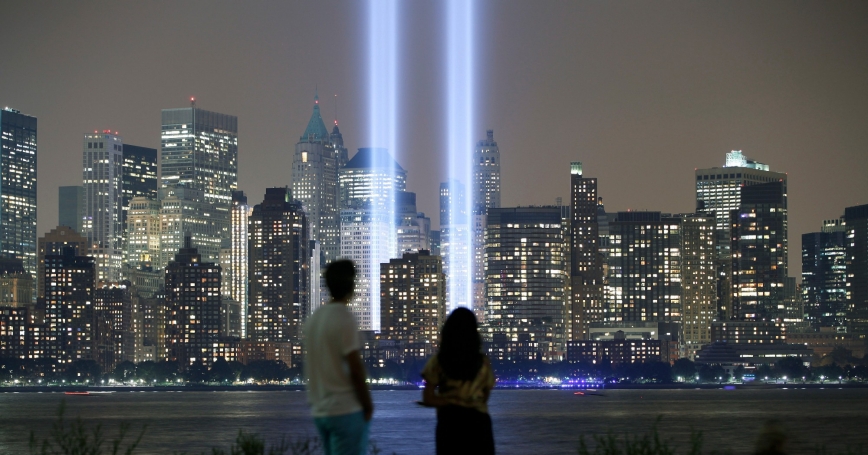 The Tribute in Light is illuminated on the skyline of New York's Lower Manhattan as people look across the Hudson River in Jersey City, September 11, 2013

Just like the country as a whole, U.S. insurance markets were caught off guard by the September 11 terrorist attacks. Loss of life and property led to an estimated $32.5 billion dollars in insured losses — $43 billion in 2013 dollars (PDF) — the largest figure up to that point. In the wake of the disaster, terrorism risk insurance became either extremely expensive or unavailable.

Congress responded by passing the Terrorism Risk Insurance Act, which was signed into law in 2002. The act provides government support for the commercial terrorism insurance market through mechanisms for spreading losses across the nation's policyholders or using government payments to cover the most extreme losses. This has helped keep terrorism risk insurance affordable for businesses.

Congress extended the act once in 2005 and again in 2007. However, with the program set to expire this year, Congress is currently revisiting a crucial question: What is the appropriate government role in terrorism insurance markets? As the debate unfolds on Capitol Hill, policymakers should consider three key findings from a recent series of RAND reports on reauthorizing the Terrorism Risk Insurance Act.

1) A robust terrorism insurance market makes communities more resilient to terrorism: While the country hasn't experienced a sophisticated attack since September 11, terrorism has nonetheless persisted in the United States in subsequent years.

The most likely attack scenarios involve terrorists using arson, conventional explosives, or firearms. However, as long as al-Qaida and other groups aspire to conduct large-scale, destructive attacks on U.S. targets using nuclear, chemical, biological, or radiological weapons, the possibility remains that they could succeed.

Attacks using conventional explosives and firearms are amenable to catastrophe modeling and are unlikely to cause losses that exceed this threshold. Attacks using nuclear, biological, chemical, or radiological weapons, by contrast, are unpredictable and pose a greater threat of losses that exceed $27.5 billion, perhaps by a substantial margin. The $27.5 billion industry retention ensures that insurers and policyholders, rather than taxpayers, are ultimately responsible for paying for incidents within the realm of insurers' limited terrorism risk models.

Terrorism insurance makes communities and our nation more resilient to terrorism risk. Recovery efforts following an attack may be swifter and more effective with a high take-up rate for terrorism insurance. On the other hand, if the the Terrorism Risk Insurance Act expires and the take-up rate for insurance falls, the United States would become less resilient to future attacks.

For example, simulated attacks ranging from $14 billion to $26 billion in losses could necessitate an estimated $1.5 billion to $7.2 billion more in federal spending should the act expire rather than remain in place.

In the absence of an attack, the Terrorism Risk Insurance Act costs taxpayers little. In the event of an attack comparable to those experienced before, it is expected to save taxpayers money.

The possibility that the act's expiration could reduce the availability of ordinary workers' compensation coverage stands in contrast to the situation in property insurance, where the consequences of expiration may reduce terrorism coverage availability without disrupting the underlying property insurance market. Because workers' compensation coverage is mandatory for nearly all U.S. employers, high-risk employers might be forced to obtain coverage in markets of last resort, which often charge employers more for coverage.

The expiration of the Terrorism Risk Insurance Act and growth in these markets of last resort could also mean that workers' compensation losses from a catastrophic attack would be financed largely by businesses and taxpayers of the state in which the attack occurred. This would make rebuilding in that state more challenging than it would be if the act remains in place, because it spreads losses across the country.

Lloyd Dixon is a senior economist, Michael Dworsky is an associate economist, Tom LaTourette is a senior physical scientist, and Henry Willis is director of the Homeland Security and Defense Center at the nonprofit, nonpartisan RAND Corporation.

This commentary originally appeared on U.S. News & World Report on June 12, 2014. Commentary gives RAND researchers a platform to convey insights based on their professional expertise and often on their peer-reviewed research and analysis.