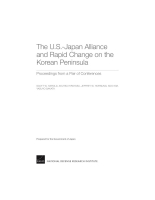 The U.S.-Japan Alliance and Rapid Change on the Korean Peninsula

Proceedings from a Pair of Conferences

Over the past several years, the U.S.-Japan alliance has faced a rapidly shifting set of circumstances on the Korean Peninsula, with deteriorating Japan–South Korea ties and an accelerating threat from North Korea, even as the Kim Jong Un regime has engaged in first-ever direct negotiations with the United States. These conference proceedings explore how changes on the Korean Peninsula are seen by observers in Japan and the United States.

As Yasuyo Sakata argues, while views of Japan in South Korea have long been somewhat unfavorable, the upsurge in tensions in Japan–South Korea relations has fueled worsening views of South Korea in Japan, which should be of concern for the United States. Jeffrey Hornung notes that the issues that divide Japan and South Korea can be categorized in a series of "baskets" that traditionally have included territorial disagreements, issues related to history, and problems of reconciliation but have recently expanded to include legal, economic, and security realms.

Turning to the North, Akutsu Hiroyasu notes the increasingly existential threat that North Korea poses to Japan, pointing to the rapid increase in the number, types, and ranges of ballistic missiles the North possesses, as well as the regime's growing and diversifying nuclear arsenal. Soo Kim closes these proceedings by examining how the Korean People's Army wields not only nuclear weapons and ballistic missile delivery systems but also cyber tools and conventional military capabilities that augment its coercive power in ways that are worrying to the United States, Japan, and South Korea.

This research was sponsored by the Government of Japan and conducted within the International Security and Defense Policy Center of the RAND National Security Research Division (NSRD).