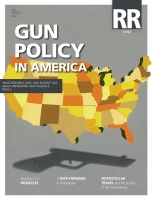 The cover story spotlights RAND's Gun Policy in America initiative, which aims to use research and analysis to fill serious knowledge gaps and fix a uniquely American problem. A second feature describes RAND's evaluation of Housing for Health, a Los Angeles County program that has succeeded in moving some of its most chronically homeless and vulnerable residents into permanent housing — while saving millions of taxpayer dollars. The Commentary column features RAND Europe's Charlene Rohr, who poses the question, If congestion tolls work in cities such as London and Stockholm, why not Seattle? The Q&A with Laurel Miller explores the future of U.S. involvement in Afghanistan. And this issue's Giving column highlights Newt Minow, a longtime public servant, RAND supporter, and member of RAND's Legacy Society.