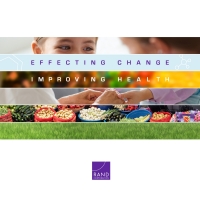 The RAND Corporation is dedicated to transforming the wellbeing of all people by improving health care systems in the United States and abroad. This book illustrates just some of the many ways that RAND has helped improve policymaking by providing health care decisionmakers, practitioners, and communities with actionable, objective evidence to support their most complex decisions.

The mix of studies, singular accomplishments, and streams of research and analysis profiled here exemplifies the wide range, originality, and influence of RAND's health research. This collection is intended to reflect the breadth of RAND's increasingly diversified health care research agenda and RAND's unparalleled ability to both mount large-scale, multidisciplinary research efforts and create scalable analytics to solve problems.

The research profiles on the COMPARE and the Palestinian projects illustrate the type of policy challenges tackled by RAND that are often beyond the reach of academic and other research institutions. These two projects embody the work of experts across multiple research disciplines and seek to address public policy problems characterized by highly charged partisan concerns for which data, evidence, and facts are in short supply. Both efforts were initiated by members of the RAND Health Advisory Board who are deeply committed to RAND's core research values of quality and objectivity, and the two projects drew support from the RAND Corporation as well as the corporate and foundation communities.

The solutions that RAND's health researchers found to many of the problems described on the following pages benefited from work of RAND colleagues, such as inventing mathematical techniques for industrial, management, and military planning, including creating systems analysis to solve problems involving high degrees of uncertainty; developing the basics of artificial intelligence; and advancing game theory and pioneering multidisciplinary gaming.

But just as important as these analytic and methodological breakthroughs have been to solving numerous health and health care problems confronting the global community, the policy solutions profiled in the following pages have, as their foundation, objective and independent research and analysis that is based on reliable data and sound information.

In an era when citizens seem increasingly unable to agree on a set of objective facts and have grown mistrustful of key institutions such as the government and the media, RAND's approach to problem-solving is needed more than ever to help restore the role of facts and analysis in political and civil discourse.