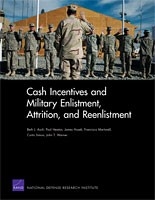 To determine whether enlistment and reenlistment bonuses are effective in maintaining or increasing the supply of personnel to the armed forces, the authors provide an empirical analysis of bonuses' effects. They developed models to assess whether bonuses have contributed to recruiting success and retention, whether they have been used flexibly, and whether they have been used efficiently, using data for each service, but with a particular emphasis on the Army. The authors find that bonus programs have been important in helping the services meet recruiting and retention objectives and have been managed flexibly by targeting bonuses to specific groups. Bonuses have helped overcome declining youth attitudes toward enlisting in the military and the adverse effects of frequent and long deployments.

The research described in this report was prepared for the Office of the Secretary of Defense (OSD). The research was conducted in the RAND National Defense Research Institute, a federally funded research and development center sponsored by the OSD, the Joint Staff, the Unified Combatant Commands, the Department of the Navy, the Marine Corps, the defense agencies, and the defense Intelligence Community.