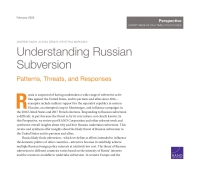 Since 2014, Russia has undertaken a wide range of subversive activities intended to influence the domestic politics of the United States, its partners, and its allies. This Perspective synthesizes previous work, discussing what subversion is and the capabilities used to undertake it today. The authors explain the interconnected Russian interests that inspire use of subversion—defense of the country and regime, being recognized as one of the world's great powers, maintaining a sphere of interest, stopping European Union and NATO enlargement, and encouraging economic prosperity. They trace the origins of Russian subversion in Soviet and post-Soviet history and examine how Russia engages in military, economic, information, cyber, and political subversion, drawing on recent events, such as attempts to influence elections in other countries, including the United States. To address Russian subversion, the authors propose focusing defensive activities on the greatest vulnerabilities, ensuring that any punishments of Russian actions are closely and clearly linked with particular acts of subversion, conducting additional research on when Russian subversion is effective, and improving rapid attribution of subversion.