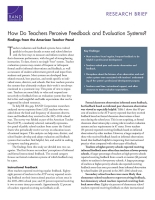 How Do Teachers Perceive Feedback and Evaluation Systems?

Findings from the American Teacher Panel

Teacher evaluation and feedback systems have evolved quickly in the past decade as states and school districts seek the best ways to measure and inform teachers about their classroom performance, with the goal of strengthening instruction. To date, there is no single "best" system. Teacher evaluation systems may consist of frequent or infrequent formal and/or informal observations and feedback, as well as measures of student achievement growth and input from students and parents. Most systems are developed from related research, best practices, and needs specific to individual states, districts, and schools. But how teachers perceive the systems that ultimately evaluate their work is not always examined in a systematic way. This point of view is important. Teachers are more likely to value and respond constructively to feedback from an evaluation system that they feel is fair and insightful and holds expectations that can be supported by school resources.

To help fill this gap, RAND Corporation researchers analyzed survey responses from 1,825 teachers who were asked about the kind and frequency of classroom observations and feedback they received in the 2015–2016 school year. The survey was fielded as part of the American Teacher Panel (ATP), a randomly selected, nationally representative panel of public school teachers from across the United States who periodically receive surveys on education issues of national import. This analysis can help state, district, and school leaders develop and adopt evaluation and feedback systems that teachers find helpful, fair, and useful in seeking to improve teaching practice.

The findings from this study are divided into two categories. The first focuses on teachers' perceptions of informal and formal instructional feedback. The second category focuses on formal evaluation systems of which feedback may be a part.

Table 1. Prevalence of Feedback from Different Sources and Reports of Improved Practices

Most teachers viewed their evaluation systems as fair to them, but not necessarily to their peers. Eighty-eight percent of teachers reported that the formal teacher evaluation systems at their schools had been fair to them, but only 67 percent reported that those systems were fair to all teachers in their schools. This suggests that at least some teachers have concerns about the objectivity of their evaluation systems, even if they reported believing that their own ratings were fair. Teachers working in high-poverty schools were slightly more likely to find the evaluation unfair to them (19 percent) than those working in lower-poverty schools (between 10 and 12 percent), although the difference was not statistically significant.

More-frequent classroom observation and feedback were viewed as especially helpful. Seventy-six percent of the surveyed teachers reported that they made improvements to their instructional practices as a direct result of their schools' evaluation systems. The frequency of the observation and feedback mattered to the teachers. A higher percentage of teachers who were observed four or more times in the school year (83 percent) found the system helpful when compared with those teachers who were observed less frequently (65–76 percent). There was one exception to the trend of higher frequency being associated with greater perceived helpfulness: A slightly larger percentage of never-observed teachers (70 percent) reported finding the teacher evaluation systems helpful compared with those who reported being observed just once, although the percentage of teachers who were never observed was small (11 percent).

Perceived fairness of the evaluation and feedback system depended on understanding the purpose of the system. Teachers who believed that evaluation systems were intended to promote teacher growth and development were more likely to rate those systems as fair, as illustrated by the dark-blue bars in the figure. Specifically, most teachers (93 percent) who agreed with the survey statement, "The teacher evaluation system is intended to promote teacher growth and development," reported that the system had been fair to them, while a smaller percentage (66 percent) of teachers who disagreed with the same statement believed that the system was fair. Similarly, as illustrated by the light-blue bars in the figure, 79 percent of teachers who agreed with the above statement and 38 percent of those who disagreed reported that the evaluation system was fair to all teachers, regardless of their personal characteristics or those of the students they teach.

Interestingly, teachers who understood the evaluation systems as playing a critical role in teacher promotion (which is a high-stakes use that might engender negative reactions) did not perceive the system as more or less fair in any significant way.

More than half of teachers indicated that they had access to resources needed to improve instruction. Table 2 lists the six types of resources included in the October 2016 ATP survey. More than half of teachers found the resources to be mostly or completely sufficient. Leadership support was sufficient for 70 percent of the teachers who reported receiving it, the largest percentage relative to the other types of resources. In contrast, time was sufficient for the lowest percentage (51 percent) of teachers who reported receiving this resource.

The ATP survey represents perceptions of teachers who work in schools that vary according to urban, suburban, and rural location; social and economic characteristics; and grades served. Together, the findings drawn from this diverse sample elicit several recommendations for policymakers and education leaders to consider as they move forward in designing and conducting effective teacher feedback and evaluation systems.

Consider the trade-offs between formal and informal feedback systems. Most of the teachers in the survey who received feedback found it useful for improving their instructional practices. This is encouraging news. Given that a higher percentage of teachers felt that peer or mentor observations and feedback were helpful relative to those who were observed and given feedback by administrators, school and district leaders should consider how much emphasis to place on the formal feedback that occurs as part of an evaluation system versus the less-formal feedback that teachers often receive from colleagues, administrators, and others.

Communicate how evaluation and observations aim to promote professional development and growth. Teachers' perceptions of the fairness of evaluation systems are connected to their understanding that the systems are designed to help them improve professionally. Designing evaluation systems with this goal and communicating this clearly and consistently across the school and school district may improve engagement among teachers and other stakeholders.