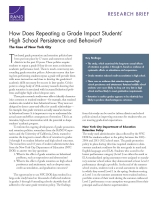 How Does Repeating a Grade Impact Students' High School Persistence and Behavior?

The Case of New York City

Test-based grade promotion and retention policies have been put into place by 17 states and numerous school districts in the past 20 years. These policies require students to repeat a grade if they do not meet a minimum academic performance level. There is much controversy surrounding grade retention polices. Advocates reason that having low-performing students repeat a grade will provide them with more instruction and time to develop the grade-level academic skills necessary for success in later grades. Critics point to a large body of 20th-century research showing that grade retention is associated with increased behavioral problems and higher high school dropout rates.

These prior research studies were able to identify characteristics common to retained students—for example, that retained students also tended to have behavioral issues. They were not designed to detect cause-and-effect (or causal) relationships—for example, that grade retention actually caused an increase in behavioral issues. It is important to try to understand the actual cause-and-effect consequences of retention: This is an intensive, high-cost intervention with the potential to shape students’ academic progress.

To inform the ongoing development of grade promotion and retention policies, researchers from the RAND Corporation and the University of California, Davis, teamed to examine the long-term causal effects of retention in grades 3 through 8 on student behavior and high school outcomes. The researchers used 12 years of student administrative data from the New York City Department of Education (NYC DOE) to answer two key questions:

The opportunity to use NYC DOE data resulted in a large-scale study based on thousands of affected students in grades 3 through 8 attending schools citywide that all adhered to the same grade retention policy. The findings from this study can be used to inform district and school policies aimed at improving outcomes for students who are not meeting grade-level expectations.

The study used administrative data collected by the NYC DOE for students subject to the policy between the 2003–2004 and 2011–2012 school years. The grade promotion policy in place during this time required students to demonstrate academic readiness for the next grade in math and English language arts (ELA). Students who scored in the lowest performance category (Level 1) on either the math or ELA standardized spring assessment were assigned to mandatory summer school unless they demonstrated at least Level 2 performance through a portfolio. At the end of the summer school session, students took a second assessment in subjects in which they scored Level 1 in the spring. Students scoring at Level 1 on the summer assessment were retained unless a portfolio review of their work during the summer evidenced Level 2 performance or an exemption was granted from their principal and local district superintendent.

Analyzing the causal effects of grade retention requires comparing what happened to students after retention (which is directly observable) to what would have happened if they were promoted instead (which is impossible to observe). A plausible comparison group is needed to estimate the outcomes of retained students if they had been promoted; this is challenging because retained students are different from the promoted students in a meaningful way that resulted in retention. The NYC DOE promotion policy allowed the study to bridge this issue by comparing students scoring at the Level 1/Level 2 boundary on the end-of-summer test, a method called regression discontinuity. The boundary students are expected to be similar except that their test scores fall just above or just below the trigger to be eligible for retention. The study estimated average outcomes, such as attendance and graduate rates, for both Level 1 and Level 2 students at the boundary. Under reasonable assumptions easily met for this study, the difference between these boundary estimates is the causal effect on a given outcome for those retained. It is important to note that the results from these analyses apply to retained students near the boundary on the summer test and account for the proportion of Level 1 students who were promoted. Retained students scoring away from this boundary may have different experiences.

Analyses of behavioral outcomes are based on a sample of 92,425 3rd through 8th graders who attended New York City public schools between the 2003–2004 and 2011–2012 school years and were required to take the summer assessment. Analyses of high school persistence outcomes are based on a subsample of 66,742 of these students, including those who would have reached high school by fall 2015. Students not subject to the policy, such as certain special education students and early English learners, were excluded.

Sustained Effects of Retention on Suspensions and Attendance Were Not Present

Suspensions, suspension severity, daily attendance, and chronic absenteeism (below 90 percent attendance) were analyzed in this part of the study. Trends in these outcomes were examined for several years after retention. As seen in Figure 1, the study found no evidence of sustained effects of retention on being suspended or the number of days suspended for all affected 3rd through 8th graders up to three years after retention (note that the error bands span the estimates for both groups). Similarly, no effects of retention were found on school attendance or chronic absenteeism (not shown). When each grade was examined individually, a few isolated temporary effects were found when students transitioned into and out of middle school (which is typically grades 6 through 8). For example, retained 5th graders had fewer suspensions only in their first year after retention, when promoted counterparts had mostly moved on to middle school; retained 7th graders had an increase in the number of days suspended only in the second year after retention, when promoted students move on to high school; and chronic absenteeism increased for retained 8th graders in the first year after retention. These results suggest that isolated effects that were found are explained by temporary differences in school level.

The analyses demonstrated that the impact of grade retention on dropping out of high school varied depending on the grade in which the student was retained. As seen in Figure 2, students retained in grades 3 through 5 (left panel) were no more likely to drop out than were promoted students; however, students retained in middle school (right panel) were more likely than their promoted counterparts to drop out once they passed their on-time graduation year.

The left-hand panel of Figure 3 shows that retained students averaged fewer credits accumulated over their time in high school. The estimated size of the effect was about twice as large for students retained in middle school than for those retained in earlier grades. The right-hand panel of Figure 3 shows that middle school students were also significantly less likely to accumulate 44 credits, which is the number required to earn a high school diploma in New York City public schools.

Grade Retention Did Not Improve the Likelihood of High School Graduation

In the on-time graduation year, when only the promoted students would have been expected to have reached grade 12, there was a significant difference in high school graduation rates; however, the analyses did not detect a statistically significant difference in the eventual graduation rates between retained and promoted students after the retained students had the opportunity to also reach grade 12 (Figure 4). While not statistically significant, the middle school graduation results displayed in the right panel of Figure 4 are consistent with dropout and credit results indicating lower high school attainment for these students. Across all grades in which students were retained, the lack of an increased graduation rate suggests that, on average, retention is not producing a benefit on high school attainment for the cost of an additional year of schooling.

Implications for Other School Districts

Grade retention is an intensive remedial intervention. The study shows that New York City grade retention policies had little influence on student misbehavior and absenteeism overall; however, retained students averaged fewer high school credits. While retention in traditional elementary school grades did not affect high school graduation and dropout rates, students retained in middle school grades were more likely than their promoted peers to drop out near the end of high school, raising concerns of a negative impact on their overall educational attainment. Given that retention in earlier grades appears to be relatively less likely to produce disadvantageous outcomes, school districts and states developing grade retention policies might consider emphasizing retention, if needed, only in the early school years. While this study addressed high school attainment, the effect of grade retention on student subject-matter knowledge and proficiency remains an area of open research.