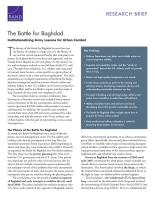 The Battle for Baghdad

The history of the Battle for Baghdad is more than just the history of combat in a large city; it is the history of not one but several sequential battles that took place over phases. Each phase had its own focus and approach, and the United States adapted to each new phase. As the enemy's tactics and techniques evolved, so too did those of the U.S. military. Through these evolutions, U.S. soldiers and commanders learned many lessons — some specific to a given phase of the battle, others with a more universal application. This brief summarizes an in-depth examination of the Battle for Baghdad that catalogs the hard-won lessons of both civilian and military leaders so that U.S. soldiers can be better prepared in future conflicts and be less likely to repeat mistakes made in Iraq. Research for the study was completed in 2017.

The researchers built an extensive evidentiary base, drawing on a literature review that included both primary sources (memoirs of the key participants) and secondary sources (previous RAND studies and journalists' accounts and histories). In addition, the research team consulted records from more than 100 interviews conducted by other researchers and held discussions with 51 key military and civilian leaders, with the goal of representing a cross-section of perspectives.

The Phases of the Battle for Baghdad

As noted, the Battle for Baghdad was a series of distinct phases, not one homogeneous event. For the soldiers and civilians who directly participated in the Iraq War, the watershed moments of their experiences differ depending on where and when they were involved in the conflict. Researchers separated the Battle for Baghdad into five distinct phases. The first phase was the prewar planning that went on in both the U.S. government and the U.S. Army. That period was important not only for what it focused on but also for what it did not include. In particular, prewar planners did not anticipate several of the problems that were encountered after the intervention in Iraq, and, because the issues were not anticipated, they got no attention during the planning phase.

The second phase was the period of initial occupation of Baghdad and early attempts to stabilize the city until April 2004. This phase included the military situation after U.S. forces took control of key segments of Baghdad and the shift from conventional operations to an urban counterinsurgency effort. Specifically, this second phase included the initial efforts to establish order, begin reconstructing damaged critical facilities, establish civilian agencies to help restore the Iraqi government (and some of the measures those agencies implemented), and rebuild Iraq's security forces.

Events in Baghdad from the summer of 2004 until early 2007 constituted the third phase, which included continued efforts to recreate Iraq's security forces and security institutions. The fourth phase involved the Surge, in which the United States committed substantial additional forces to the fight in Iraq — an additional five combat brigades.

The final phase — the withdrawal of U.S. forces from Iraq — occurred in the aftermath of the Surge and involved the transitioning of Multi-National Force–Iraq (MNF-I) into United States Forces–Iraq (USF-I). The U.S. withdrawal led to the new Iraqi Security Forces (ISF) becoming increasingly polarized, Iraq nearly collapsing in 2014, and the Islamic State capturing large swathes of the northern half of Iraq a mere two years after American forces withdrew.

Key Lessons Learned for the Army, by Phase

After looking across the five phases, the research team derived lessons that fell into three broad categories. The first category entails lessons that the Army has the authority to institutionalize. The second category involves lessons that the Army does not have the authority to institutionalize but in which it has an advisory role, such as the need to establish intergovernmental unity of command. For such lessons, Army leaders must provide expert military advice and attempt to influence decisions beyond their authority because those decisions have direct and indirect effects on the Army.

For the third category — lessons that the Army must institutionalize through a combined effort with other actors — the Army must be involved in a collaborative role with other actors. At the strategic level, these opportunities include analyzing the overall end strength of the Army within the joint force to accomplish missions specified in national strategies. At the operational level, the Army must anticipate what will happen in an operation when assumptions are not fully addressed and must plan for alternatives.

Table 1 categorizes the lessons by phase and category.

Overarching Lessons from the Iraq War and Recommendations for the Army

In addition to identifying the specific lessons from each phase, researchers distilled some overarching, cross-cutting lessons from the Iraq War. Table 2 outlines the lessons, the observations that drive those lessons, and the associated recommendations. All the lessons identified in Table 2 fall within the Army's authority to institutionalize, and, in some cases, the Army is already doing so.

Over the years of conflict in Iraq, the U.S. Army — largely trained, organized, and equipped in 2003 to "dominate land warfare" — adapted to meet the demands it faced on the ground after the collapse of the Saddam Hussein regime. Tactical units generally adapted quickly, but they did not have a strategic or doctrinal framework to give that adaptation coherence or any linkage to policy objectives, which were initially unrealistic. Eventually, the Army as an institution caught up to practice in theater and provided the forces and capabilities needed to win the Battle for Baghdad.

These adaptations were extraordinarily broad-ranging: building and advising the ISF, advising Iraqi ministries, staffing provisional reconstruction teams, and accomplishing a host of other missions that the Defense Department and other U.S. government agencies had not sufficiently prepared for before Operation Iraqi Freedom. The challenge now is to shape the Army for the future detailed in 2014's U.S. Army Operating Concept: Win in a Complex World while institutionalizing the hard-learned lessons of the conflict in Iraq. Instability and insurgency are almost certainly part of that future, and, if history is any guide, the United States will look to the Army to deal with these challenges.