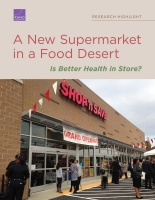 A New Supermarket in a Food Desert

Is Better Health in Store? 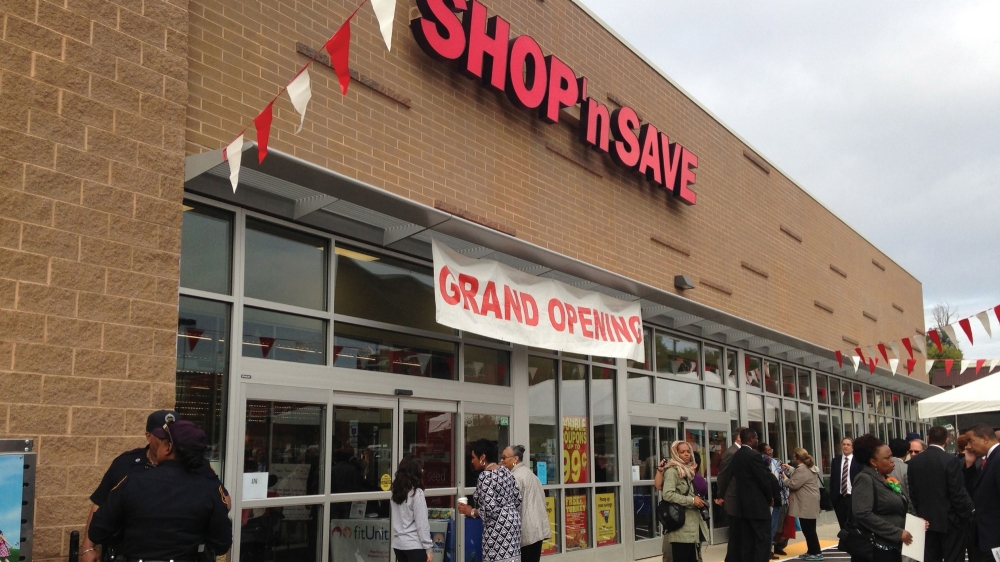 Food deserts are neighborhoods where residents lack access to affordable healthy food. Some public health experts believe that food deserts contribute to America's obesity problem. The logic of their view is that people rely on the food available in their immediate neighborhoods. Therefore, when the only nearby outlets are fast-food restaurants and convenience stores, residents consume high-calorie, low-nutrition foods found at such outlets, which leads to poor diet and higher rates of obesity. In the United States, African-Americans are four times more likely than whites to live in a neighborhood without a full-service supermarket. Thus, many public health advocates and policymakers have pointed to this as an explanation for why African-American adults are 1.5 times more likely to be obese than white adults.

Based on the perceived link between food deserts and obesity, the U.S. government has spent more than $500 million building supermarkets in urban food deserts since 2011. However, evidence about the effects of this investment remains scarce. The only studies to date have not shown a direct link between a new supermarket and residents' diet or health, but these studies faced limitations in attaining large random samples of residents and rigorously measuring resident diet. Therefore, the question remains: Does introducing a new supermarket into a food desert improve diet and reduce obesity?

To answer this question, a team of RAND researchers conducted the most comprehensive study to date of the effects of introducing a supermarket into an urban food desert. The study, Pittsburgh Hill/Homewood Research on Eating, Shopping, and Health (PHRESH), took advantage of a natural experiment in Pittsburgh, Pennsylvania. The Hill District neighborhood, which served as the intervention neighborhood, received a new, full-service supermarket funded in part by the federal Healthy Food Financing Initiative. A predominantly African-American low-income neighborhood, the Hill District had lacked a supermarket for the past 30 years. A demographically similar neighborhood, Homewood, where no new supermarket was planned, was chosen as a comparison site.

The New Supermarket Led to Improvements in Diet, Though Not in Obesity . . .

Compared with residents of the Homewood (comparison) neighborhood, Hill District neighborhood residents began to eat diets that were healthier in some ways. Specifically, they consumed fewer calories, less added sugar, and fewer "empty calories": solid fat, alcohol, and added sugars. However, there was no statistically significant change in other dietary outcomes, such as consumption of fruits, vegetables, and whole grain foods.

Moreover, results related to obesity showed no significant change in the Hill District. BMI — the main indicator used to measure obesity — was unchanged, and there were no significant changes in rates of obesity or overweight. In the Homewood neighborhood, average BMI, obesity, and overweight all got slightly worse.

Perceptions of access to healthy foods — specifically, access to fruits and vegetables, low-fat foods, and whole grains — improved significantly for Hill District neighborhood residents, as did their overall satisfaction with their neighborhood. Before the arrival of the supermarket, about 66 percent of Hill District resident participants said they were satisfied or very satisfied with their neighborhood as a place to live; after the supermarket opened, 80 percent said so.

The New Supermarket Led to Some Improvements

* This table only indicates a decrease or improvement that was shown to be statistically significant at the p < 0.05 level.

. . . But Most Improvements Were Not Linked to Supermarket Use

These improvements in diet and neighborhood satisfaction among Hill District residents were not significantly linked with frequency of shopping at the new supermarket. Both frequent and infrequent shoppers experienced the same improvements. Furthermore, changes in food purchasing patterns — weekly food spending, major food shopping frequency, and types of food stores frequented — did not explain the gains. There was one exception: Perceived access to healthy food improved significantly more among regular supermarket users than among other Hill District residents.

What Accounts for These Results?

These results may appear counterintuitive. After the market opening, Hill District residents' diets improved, and they felt greater satisfaction with the neighborhood; however, these gains could not be directly linked to use of the supermarket. The researchers offered three possible explanations:

The PHRESH study found no significant changes in resident weight or prevalence of overweight or obesity. However, it was the first study to find that a new full- service supermarket in a food desert led to multiple improvements in the quality of neighborhood residents' diets. The study also documented a dramatic improvement in neighborhood satisfaction. The results imply that continued federal financing of new supermarkets can potentially benefit residents' health and well-being. It is also critical to document and examine the forces that influence neighborhood health and nutrition in order to inform policies for combating obesity.