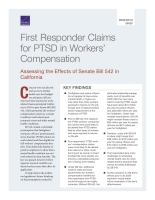 Assessing the Effects of Senate Bill 542 in California

Concern over suicide risk and access to mental health care for firefighters and peace officers who have been exposed to work-related trauma prompted California in 2019 to pass Senate Bill (SB) 542, which promoted the workers' compensation system as a means to address work-related posttraumatic stress and other mental health conditions.

SB 542 created a rebuttable presumption that firefighters' and peace officers' posttraumatic stress disorder (PTSD) claims are work-related and thus eligible for full workers' compensation benefits. That shifted the burden of proof to employers to show that a mental health condition was not work-related to deny benefits. The law was passed, however, before rigorous research could be conducted on key issues that affect its application.

To help inform the California legislature's future thinking on the presumption created by SB 542, which expires in 2025, the California Commission on Health and Safety and Workers' Compensation (CHSWC) asked the RAND Corporation to research a range of questions centered on first responders' mental health and suicide risks, how they access mental health care for work-related trauma exposure, how their PTSD workers' compensation claims are handled, and the costs associated with those claims, among other concerns. Beyond the debate over SB 542, the occurrence of highly visible disasters in California, such as mass shootings and increasingly frequent and intense wildfires, has brought attention to the mental health effects that traumatic exposures in the line of duty can have on first responders.

In the resulting report, Posttraumatic Stress in California's Workers' Compensation System: A Study of Mental Health Presumptions for Firefighters and Peace Officers Under Senate Bill 542, RAND researchers found the following:

A complete response to the 12 questions posed by CHSWC is contained in the RAND report. Firefighters and peace officers are referred to as first responders in this brief, with due regard for the fact that they are not the only occupations considered first responders.

Some of the report's findings substantiate a central rationale for SB 542, which was to remove avoidable barriers to proving that a mental health claim was work-related and to receiving compensation for mental health treatment.

Most organized opposition to SB 542 was driven by employers—city and county governments—who were worried about the costs that might result from a presumption for PTSD. The RAND report estimates the scale of those increased costs, with important caveats.

Even if SB 542 is as costly as the RAND report suggests, and even if evidence does not show that first responders have worse mental health or suicide rates than other workers exposed to trauma on the job, policymakers might still decide that SB 542's benefits justify the policy. The RAND report also raises another policy question: Are firefighters and peace officers the only first responders deserving of the presumption that a PTSD claim is job-related?

To address CHSWC's questions, RAND researchers conducted a mixed-methods study. The research team combined quantitative analysis of survey and administrative data with information gathered through semistructured interviews about the experiences of those who used the workers' compensation system to get treatment for job-related mental health conditions across California.

The report was not designed to capture some potentially important categories of benefits that might accrue to city, county, and state governments from easing access to PTSD and mental health care for work-related trauma exposure for firefighters and peace officers. Those benefits include avoiding the costs of overtime to cover work absence due to PTSD, less turnover, and lower hiring and retraining costs. Those benefits—and potentially other costs—could be detailed with further research.

The RAND report also does not provide policymakers a firm yes-or-no recommendation on whether California should extend the presumption established by SB 542 in 2025; that calculus falls in the realm of policymaking, not research. There is still time, however, for further evaluation of SB 542 before the PTSD presumption is due to expire. Deeper exploration of SB 542's costs and benefits could fill some of the remaining gaps in knowledge to better inform deliberations on the law's future.

Exploring the Issues Around SB 542

The RAND team reviewed published studies on suicide mortality rates by occupation and produced new estimates of the prevalence of serious mental distress and suicidal ideation by occupation using survey data on workers in California. The researchers did not find clear evidence of systematically worse mental health or elevated suicide risk among first responders.

Data on suicide mortality rates published by the Centers for Disease Control and Prevention did show higher suicide risk for women in protective service occupations, but more research is needed to determine whether this is driven by peace officers and firefighters or by other occupations, such as security guards and correctional officers, which are protective service occupations that employ more women than firefighting and police work and that exhibited signs of worse mental health in the data from California analyzed in the RAND study.

The finding that first responders do not have worse mental health than other professionals who are exposed to traumatic events on the job does not imply that the presumption created by SB 542 is unwarranted, however; the authors do not mean to suggest that mental health and suicide are not serious problems for first responders.

That said, the RAND team found higher rates of mental distress and suicidal ideation in other trauma-exposed occupations—especially in ambulance drivers, non-firefighter emergency medical technicians (EMTs), and security guards. This finding indicates that challenges with mental health and suicide do not appear to be limited to or uniquely severe among firefighters and peace officers. Thus, public health officials should consider examining workplace mental health in a wider range of trauma-exposed occupations than just occupations covered by SB 542.

Over the 12 years prior to enactment of SB 542, about a quarter of first responder claims involving PTSD were initially denied during the investigation stage or prior to payment of benefits (Figure 1). This includes 24 percent of firefighter claims and 27 percent of peace officer claims. These initial denial rates are statistically significantly higher than denial rates for PTSD claims filed by workers in other trauma-exposed occupations.

These comparisons across occupations have some important limitations: The report's estimates did not capture workers who did not receive PTSD care billed to workers' compensation—that is, those whose PTSD care was paid for through other means. It is also possible that the lower claim-denial rates among private-sector workers might be explained by their greater reluctance to file claims due to lesser job security and weaker protections against retaliation.

On the other hand, the RAND team found (consistent with many prior studies) that severe mental health stigma arising from both institutional and cultural factors deters first responders from seeking help and filing workers' compensation claims. The RAND researchers could not eliminate these potential sources of bias in the estimates, so comparisons of denial rates must be interpreted with caution.

The report data also show that denial rates for PTSD claims by first responders were more than twice as high as denial rates observed for all other conditions that are presumed under the California Labor Code to be work-related among first responders (for example, cancer and heart trouble; Figure 2).

The potential additional costs generated due to a presumption that PTSD is work-related for first responders were a primary concern for those who opposed the passage of SB 542.

Two mechanisms might increase those costs. First, more first responders might make PTSD claims because of the law. (It should be noted that first responders filed relatively few PTSD claims prior to SB 542: 82 firefighter claims and 171 peace officer claims per year between 2016 and 2019.) Second, it is likely that fewer of their PTSD claims would be denied, which could result in higher costs per claim filed.

Based on assumptions detailed in the report, and subject to the caveat that these estimates are subject to a wide range of uncertainty, RAND researchers found that, with the PTSD presumption in place, the annual yearly cost of PTSD claims for state and local government could increase from $14 million to $95 million for peace officers. For firefighters, the cost could rise from $6 million to $21 million. The uncertainty in these estimates arose in large part from the lack of precise understanding of the true PTSD incidence rate among first responders—something that should be elevated as a priority for future research.

Employee assistance programs (EAPs) were also viewed as ineffective by first responders who used them to address traumatic stress; others avoided EAPs entirely due to inadequate guarantees of confidentiality.

As a result, nearly all the first responders who were interviewed paid for their PTSD care entirely out of pocket, which caused severe financial strain in some cases. Some were eventually reimbursed by workers' compensation, but only after litigation and substantial delay. Some who pursued care through workers' compensation also noted that claim denials led to delays in the start of mental health treatment.

Many of these challenges do not originate solely within the workers' compensation system; even in a best-case scenario, SB 542 is not a panacea for all the issues that RAND researchers identified with first responders' mental health care for work-related trauma exposure. Whatever the future of SB 542, governments and policymakers concerned about occupational mental health—of first responders and other workers—should consider alternative care delivery models that might be more effective than the patchwork of payers, provider networks, and administrative processes that constitutes the current mental health care system.

Evidence on first responders' PTSD claim volumes and denial rates since SB 542 came into effect in 2019 are crucial to assessing its effects. Unfortunately, the coronavirus disease 2019 (COVID-19) pandemic will complicate interpretation of 2020 data. CHSWC should revisit this question in 2023, when the pandemic might have receded.

More information on the effect of SB 542 on issues of stigma related to PTSD care, uptake of mental health care services for work-related trauma exposure, and first responders' organizational culture would enrich future deliberations on the law. Likewise, further qualitative investigation could aid in understanding whether burdens of the PTSD claims process are reduced under SB 542 (particularly claim denials resulting from disconnects in mental health provider documentation).

The RAND team did not conduct a full cost-benefit analysis of more effectively addressing PTSD in first responders. Potential benefits that should be explored more rigorously include better readiness and improved public safety.

On the cost side, uncertainty in the report's estimates of additional costs to city, county, and state governments arising from SB 542 resulted from a lack of data on the true PTSD incidence rate among first responders. The report's findings also were constrained by limited evidence on the indirect costs of untreated PTSD, including work absences, staff turnover, degraded job performance, and other factors.

Quantification of these costs and benefits would inform balanced consideration of SB 542 in the future.

The report notes the difficulties that first responders confront when seeking culturally competent mental health providers under current structures. Although some first responder organizations are experimenting with interesting models to address that shortcoming, evidence on their effectiveness, costs, and benefits is scarce.

Contemplate Expanding the SB 542 Presumption to Other Occupations

As noted, firefighters and police are not the only front-line workers exposed to trauma. Paramedics, transport personnel, and some nursing professionals, for instance, can experience some of the same mental health dynamics confronting firefighters and peace officers—especially during the COVID-19 pandemic. If policymakers find that SB 542's benefits exceed its costs, they should also consider whether the law's presumption that PTSD is job-related should be extended to other occupations in which workers are exposed to traumatic events on the job.

Research on the similarities and differences between those covered by SB 542 and other occupations in terms of mental health treatment would provide an evidence base to inform future deliberations.