In 2019, California enacted Senate Bill 542, creating a legal presumption that posttraumatic stress disorder in firefighters and peace officers is a work-related injury and compensable under workers' compensation. The authors evaluate the prevalence of mental health conditions among first responders and discuss implications for future policy. 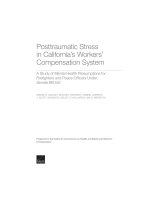 In 2019, California enacted Senate Bill (SB) 542, which created a rebuttable presumption that posttraumatic stress disorder (PTSD) in firefighters and peace officers is a work-related injury and thus compensable under workers' compensation.

California has long used presumptions to facilitate workers' compensation claims for many other occupational health conditions in first responders, including cancer, heart trouble, and hernia. SB 542 is intended to encourage care-seeking among first responders and reduce the stigma associated with filing a workers' compensation claim for a mental health condition. The presumption is in effect for injuries occurring between January 1, 2020, and December 31, 2024.

The authors of this report evaluate the prevalence of mental health conditions and illnesses among firefighters and peace officers and discuss the implications that this evidence has for policy regarding presumptions established by SB 542. Using a mixed-methods approach, the authors also investigate the frequency of workers' compensation claims involving PTSD, how often these claims are denied, and how first responders experiencing PTSD access mental health care. First responders' mental health and experiences in the workers' compensation system are compared with those of workers in other trauma-exposed occupations. Claims involving PTSD are compared with claims involving other health conditions — such as cancer, heart trouble, and hernias — that are also presumed to be work-related in first responders under California law. The report also contains estimates of the costs to state and local government that might result from presumptive coverage of PTSD in the workers' compensation system, and the authors also discuss stakeholder perspectives on SB 542.

The research described in this report was prepared for the the California Commission on Health and Safety and Workers' Compensation (CHSWC) in the Department of Industrial Relations (DIR) and conducted by the Community Health and Environmental Policy Program within RAND Social and Economic Well-Being.