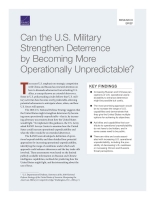 The recent U.S. emphasis on strategic competition with China and Russia has renewed attention on how to dissuade adversaries from attacking U.S. allies, a concept known as extended deterrence. Some in U.S. policymaking circles believe that U.S. military activities have become overly predictable, allowing potential adversaries to anticipate where, when, and how U.S. forces will operate.

The RAND team developed a definition of operational unpredictability and then detailed four potential approaches for increasing operational unpredictability, identifying the range of conditions under which each approach could enhance deterrence and the key trade-offs involved. These assessments were based on the limited publicly available information on Russian and Chinese intelligence capabilities, methods for predicting how the United States might fight, and decisionmaking about the use of force.

What Is Operational Unpredictability?

The rationale behind each approach is as follows:

The table shows the research team's assessment of the likely effectiveness of the four approaches in increasing Russia's and China's perceptions of U.S. operational unpredictability and thereby increasing the United States' ability to deter attacks on its allies.

Overall, the analysis found that increasing Russian and Chinese perceptions of U.S. operational unpredictability to enhance deterrence might be possible but costly. Many of the approaches would require major investments or other changes to U.S. military capabilities. Small changes to U.S. exercises, deployment patterns, capabilities, and other activities in the steady state would have low costs but are likely to have low impact.

The most promising way to enhance deterrence would be to increase the range of U.S. capabilities and demonstrate that they give the United States multiple options for achieving its key objectives. If alternative U.S. courses of action were to require substantially different adversary countermeasures, the adversary might conclude that it would face higher costs to prepare for conflict and/or have a lower likelihood of success. Increasing U.S. interoperability across services and improving the flexibility and agility of U.S. forces would be consistent with this approach. Other approaches, such as irregular deployment patterns, are less promising because of Russian and Chinese intelligence capabilities, as well as U.S. institutional and bureaucratic hurdles.

Activities and capabilities that contribute to operational unpredictability do not have to be hidden, and in some cases need to be public. Publicized investments in new capabilities, security cooperation, exercises, and deployments that enable a new course of action could make U.S. alternative ways of fighting more credible to the adversary. Public messaging, especially by senior leaders, might even shape adversaries' interpretations of U.S. activities.

The RAND team made the following recommendations for the Joint Force: