The 2018 U.S. National Defense Strategy instructed the U.S. military to become more operationally unpredictable and suggested that doing so would help the United States deter attacks on U.S. partners. The authors of this report assess whether and how the U.S. military might utilize unpredictability in force employment, posture, and operations to deter adversaries and identify the possible risks of such approaches. 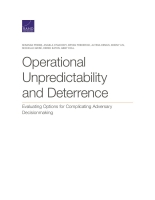 Increasing operational unpredictability is possible but likely costly, and may have negative side effects