This report aims to assist the Air Force in its continued efforts to combat sexual assault perpetration within its ranks by examining the existing empirical literature on adult perpetrators who commit sexual assault against other adults, with a particular focus on research published in 2000 or later. The literature search focused on the current state of scientific knowledge and was not limited to studies focusing on military populations. 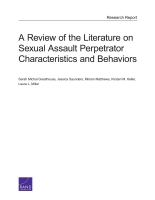 The research reported here was sponsored by the director of Air Force Sexual Assault Prevention and Response (SAPR), the Office of the Vice Chief of Staff (AF/CVS), and the commander of Air Force Recruiting Service (AFRS/CC). It was conducted within the Manpower, Personnel, and Training Program of RAND Project AIR FORCE.