This update of a previous report provides findings on economic activity supported by total Army spending in congressional districts for fiscal years 2014 through 2017. Using input/output models, researchers estimated that the Army directly spent approximately $80.1 million in the median congressional district and $1.3 billion in the median state in fiscal year 2017, translating into approximately 3,800 jobs per district and 48,000 jobs per state. 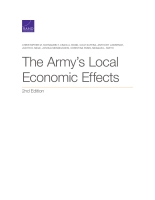 This report updates a previous report with findings on the economic activity supported by total Army spending in each of the 435 congressional districts in fiscal years 2014 through 2017. To estimate this activity, researchers used district-level input-output (I/O) models and a national-level I/O model known as IMPLAN. Each district-level model is used to estimate the direct, indirect, and induced effects of national-level Army spending that affect a particular district. In this context, direct effects are the total Army spending within a district; indirect and induced effects represent the local economic activity that supports both the direct spending and the in-district demand generated from Army spending outside the district. Indirect effects capture interindustry linkages, while induced effects capture the effects of household incomes.

For each congressional district, this report provides the following estimates:

Results are aggregated by state and the economic activity associated with Army spending is separated by component where applicable.

This research was sponsored by the sponsored by the Office of the Deputy Chief of Staff, G-8, U.S. Army and conducted within the Strategy and Resources Program, a part of the RAND Arroyo Center.