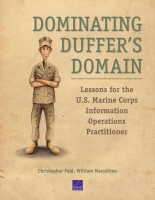 More than a century after its release, The Defence of Duffer's Drift by Major General Sir Ernest Swinton has become an enduring military classic. This piece of instructional fiction, in which the narrator learns from his operational mistakes over a series of dreams, has earned a place in military classrooms and has inspired military leaders, analysts, and historians. Indeed, the narrative form can be a powerful teaching and learning tool.

Looking for the Army Version?

To support the U.S. Marine Corps and its curriculum for information operations personnel, RAND has adapted the premise of General Swinton's work for a modern-day audience and a different problem set. The fictitious narrator, Captain I. N. Hindsight, takes readers repeatedly through the same mission over the course of six dreams in which he makes shortsighted decisions, critical miscalculations, and smaller mistakes that contribute to spectacular failures until his accumulated lessons ultimately allow him and the command he supports to succeed. The fabricated instructional scenario draws on actual historical operations, alternative directions that these operations could have taken, and realistic challenges that a Marine Corps information operations planner might face. The 26 concise lessons in this volume offer insight that, ideally, the practitioner will not need to acquire through hindsight.

This work was sponsored by the Combating Terrorism Technical Support Office on behalf of the Marine Corps Information Operations Center (MCIOC) and conducted within the International Security and Defense Policy Center of the RAND National Defense Research Institute, a federally funded research and development center sponsored by the Office of the Secretary of Defense, the Joint Staff, the Unified Combatant Commands, the Navy, the Marine Corps, the defense agencies, and the defense Intelligence Community.