This report accomplishes the fiscal year (FY) 2016 assessment of the Civilian Acquisition Workforce Personnel Demonstration Project (AcqDemo) mandated in the National Defense Authorization Act of FY 2011. AcqDemo aims to provide a system that retains, recognizes, and rewards employees for their contributions and supports their personal and professional development. 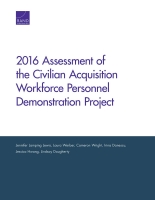 In August 2015, René Thomas-Rizzo, director, Human Capital Initiatives, Office of the Under Secretary of Defense for Acquisition, Technology, and Logistics, asked the RAND Corporation to undertake a study to accomplish the fiscal year (FY) 2016 assessment of the Civilian Acquisition Workforce Personnel Demonstration Project (AcqDemo) mandated in the National Defense Authorization Act (NDAA) of FY 2011. AcqDemo aims to provide a system that retains, recognizes, and rewards employees for their contributions and supports their personal and professional development. The assessment used multiple data sources to evaluate how well AcqDemo has performed with respect to these goals. The assessment directly addresses the original 12 criteria enumerated in the NDAA, as well as five new criteria specified by the AcqDemo Program Office. These criteria call for a look at the following: AcqDemo's key features pertaining to hiring, appointments, and performance appraisal; the adequacy of its guidance, protections for diversity, efforts to ensure fairness and transparency, and means used to involve employees in improving AcqDemo; AcqDemo's impact on career outcomes, such as compensation, promotion, and retention, particularly with respect to similar outcomes for the General Schedule workforce; AcqDemo's ability to support the acquisition mission. The RAND team found that some aspects of AcqDemo are performing well, while others leave room for improvement.

Aspects of AcqDemo That Are Performing Well

Aspects of AcqDemo That Leave Room for Improvement

This research was sponsored by Human Capital Initiatives, OUSD for AT&L, and conducted within the Forces and Resources Policy Center of the RAND National Defense Research Institute, a federally funded research and development center sponsored by the Office of the Secretary of Defense, the Joint Staff, the Unified Combatant Commands, the Navy, the Marine Corps, the defense agencies, and the defense Intelligence Community.