Heightened tensions between Russia and NATO since 2014 have prompted the Alliance to take a fresh look at NATO's ability to deter potential Russian aggression. In this report, RAND researchers develop a framework that analysts can use to assess likely Russian reactions to ongoing and proposed NATO posture enhancements in Europe, which can help policymakers determine the utility and advisability of different options. 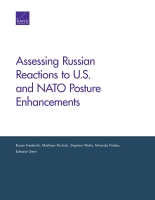 The North Atlantic Treaty Organization (NATO) is in the process of implementing posture enhancements to increase capabilities on its eastern flank, and the escalation in tensions between Russia and NATO since 2014 has led analysts to propose measures that are even more extensive. However, Russia's likely reactions to such posture enhancements remain understudied. In this report, we develop a framework that analysts can use to assess likely Russian reactions to ongoing and proposed NATO posture enhancements in Europe. We develop this framework by assessing Russian strategic writing, the broader international relations literature, and the history of post–Cold War interactions between Russia and NATO. Our analysis suggests that Russian reactions will depend on 11 key factors that capture the strategic context, the Russian domestic context, and the characteristics of the proposed posture enhancements. We then illustrate how this framework can be applied in practice by assessing Russia's potential reactions to both planned and proposed enhancements. These assessments highlight the importance of clear analysis of Russian perceptions of NATO's intentions and commitment, domestic threats to the Russian regime, and the cost sensitivity of the Russian leadership.