Deterring Russian Aggression in the Baltic States Through Resilience and Resistance 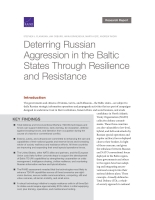 The authors of this report assess how unconventional defense plans and capabilities — to include total and comprehensive defense, societal resilience, and resistance strategies — being pursued by the governments of Estonia, Latvia, and Lithuania (referred to as the Baltic states) can deter and counteract Russian hybrid aggression and military attacks in the Baltic region. They advance a framework for evaluating the utility of unconventional and total defense efforts at various phases of conflict for strengthening deterrence and defense. They identify military and civilian technologies that could enhance the effectiveness of these efforts, the cost of procuring those technologies, and possible tradeoffs with the development of conventional defense capabilities.

The authors estimate that a robust technology initiative to enhance these capabilities for all three states would cost about $125 million, could be implemented over several years, and is scalable. The authors also discuss the benefits and risks of expanding unconventional and total defense efforts and potential Russian responses and countermeasures. Finally, they outline steps that the Baltic governments, the United States, other NATO allies and partners, and the European Union could take to enhance these efforts.

The authors conclude that total defense and unconventional warfare capabilities can complement the existing conventional defense efforts of the Baltic states and NATO, improve warning of an attack, augment initial defenses, and buy time for (and provide support to) national and NATO conventional responses.