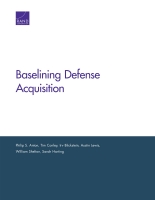 The U.S. Department of Defense (DoD) aims to improve mission effectiveness and efficiency. In support of this effort, the Office of the Secretary of Defense asked the National Defense Research Institute (NDRI), a federally funded research and development center operated by the RAND Corporation, to construct a baseline of the DoD's government acquisition and procurement functions, including a functional decomposition and estimate of the cost of executing the government portion of the DoD's acquisition enterprise. NDRI researchers estimated these costs at between $29 billion and $38 billion in fiscal year 2017 dollars. To gain perspective on these costs, NDRI researchers identified commercial benchmarks for the amount of program management levels. As a percentage of DoD contracting obligations, NDRI researchers estimated the DoD's program management portion of these costs at about 1.5 percent in the last few years, which is below industry benchmarks of 2–15 percent.

This research was sponsored by the Director of Acquisition, Resources, and Analysis in the then-OUSD(AT&L) and conducted within the Acquisition and Technology Policy Center of the RAND National Defense Research Institute.