The U.S. Air Force's Air Education and Training Command asked RAND to develop an integrated survey system to help address abuse and misconduct by military training instructors (MTIs) toward trainees during Basic Military Training. RAND developed two complementary surveys, one for trainees and one for MTIs. The report also includes recommendations about survey administration, reporting the results, and tracking and monitoring abuse and misconduct. 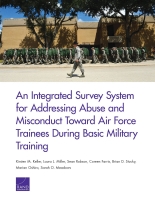 In response to several high-profile incidents of sexual misconduct by military training instructors (MTIs) during Basic Military Training (BMT), in 2012 the U.S. Air Force's Air Education and Training Command (AETC) asked RAND Project AIR FORCE to develop an integrated survey system to help address abuse and misconduct toward trainees in the BMT environment. Based on an extensive review of relevant materials — including internal AETC investigations of these incidents, Air Force and Department of Defense policies, and the scientific literature — RAND developed two complementary surveys, one for trainees and one for MTIs. The trainee survey assesses trainee experiences and related reporting behaviors for the following abuse and misconduct categories: trainee bullying, maltreatment and maltraining, unprofessional relationships, sexual harassment, and unwanted sexual experiences. The survey also measures individual perceptions of the squadron climate and BMT feedback and support systems. The MTI survey assesses the extent to which MTIs were aware of trainees experiencing abuse, as well as their perceptions of the related squadron climate and MTI reporting behaviors. The MTI survey also includes a section on MTI quality of life, including job attitudes, the work environment, and job stressors. An Integrated Survey System for Addressing Abuse and Misconduct toward Air Force Trainees During Basic Military Training concludes with recommendations about survey administration, reporting the results, and additional areas for improvement to better track and monitor actual instances of and the potential for abuse and misconduct.

When Integrated into an Overall Feedback System, the Survey Results Will Give Leadership a More Complete Picture of "Ground Truth" and Point Toward Corrective Actions.

The Surveys Should Be Anonymous or Confidential to the Greatest Extent Possible.

The research reported here was commissioned by the commander of the Air Force's Air Education and Training Command (AETC/CC) and was conducted within the Manpower, Personnel, and Training Program of RAND Project AIR FORCE.