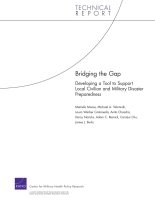 U.S. policymakers have stepped up systematic disaster preparedness efforts sharply since the terrorist attacks of September 11, 2001, including the creation of the U.S. Department of Homeland Security and a plethora of federal initiatives. Against a backdrop of natural disasters that occur each year in the United States and heightened concern about pandemic influenza, there is an emerging national consensus that the best path is an all-hazards approach to disaster preparedness planning and that effective local planning is critical. Military installations and their civilian counterparts — local government and local health-care providers, especially the U.S. Department of Veterans Affairs — can strengthen local-level disaster preparedness planning. This is an interim report for the first phase of a larger study aiming to develop a planning support tool for local military and civilian planners. It describes current policies and programs — especially those with nationwide application — for domestic emergency preparedness, risk analysis, and capabilities-based planning. It also describes results from interviews with local military and civilian planners at five selected sites to help understand how local preparedness planning currently operates and identify the needs of local planners. Collectively, these form the basis for a proposed tool, for which the framework is described in this report. The next phase of the study will include development and field testing of a proof-of-concept prototype of the tool.

The research reported here was prepared for the Office of the Secretary of Defense (OSD). The research was conducted jointly by the Center for Military Health Policy Research, a RAND Health program, and the Forces and Resources Policy Center, a RAND National Defense Research Institute (NDRI) program. NDRI is a federally funded research and development center sponsored by OSD, the Joint Staff, the Unified Combatant Commands, the Department of the Navy, the Marine Corps, the defense agencies, and the defense Intelligence Community.