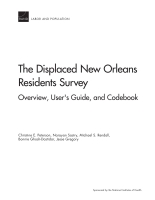 The 2009-2010 Displaced New Orleans Residents Survey (DNORS) is a study of individuals and households that resided in the City of New Orleans, Louisiana, in August 2005, just before Hurricane Katrina struck (on 29 August 2005). Fieldwork for the study was conducted between mid-2009 and mid-2010. The aim of the study was to collect data for analyzing the location, living arrangements, health, and well-being of pre-Katrina residents of New Orleans. DNORS drew a sample of pre-Katrina dwellings of the city, identified the pre-storm residents of these dwellings, and tracked and interviewed these people wherever they lived at the time of the survey. In particular, DNORS interviewed pre-Katrina residents of New Orleans who had returned to the city as well as residents who had resettled elsewhere. This documentation provides an overview of DNORS, and serves as a guide and codebook for researchers interested in the public use or restricted versions of these data.

The research described in this report was sponsored by the National Institutes of Health and conducted by RAND Labor and Population.