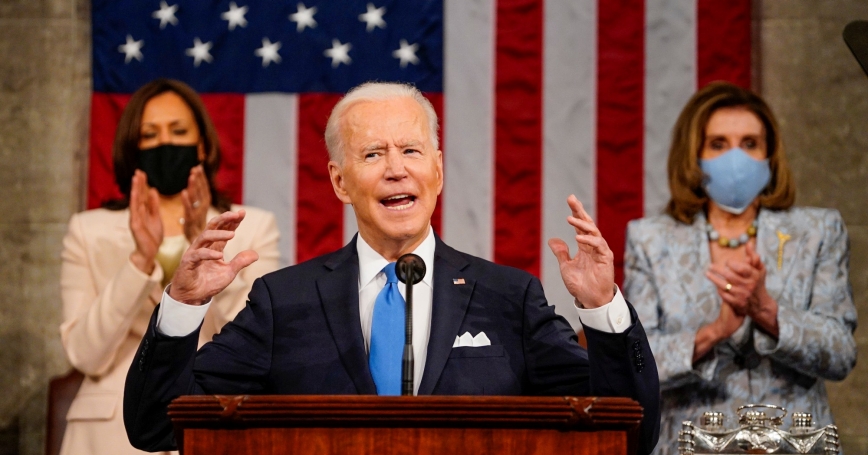 Last night, on the eve of his 100th day in office, President Joe Biden addressed a joint session of Congress, summarizing his administration's early COVID-19 response and outlining plans that aim to loosen the pandemic's year-long grip on a weary nation.

Although about 55 percent of U.S. adults have now received at least one vaccine dose, images from the evening underscored the ongoing nature of the health crisis. Lawmakers and others practiced social distancing. The president wore a mask when he wasn't speaking. And roughly 200 people gathered, rather than the usual 1,600 who would normally pack the House chamber.

The address also reflected the fact that the United States faces policy challenges across a wide range of domains. “We are at a great inflection point in history,” President Biden said.

To develop effective, evidence-based solutions to these problems, policymakers will need to rely on objective and nonpartisan resources. Below are excerpts from the president's remarks, followed by context from RAND research, analysis, and expertise.

How to Address Vaccine Hesitancy

“Today, 90 percent of Americans now live within five miles of a vaccination site. Everyone over the age of 16, everyone—is now eligible and can get vaccinated right away. So get vaccinated now.”

Evidence indicates that COVID-19 vaccines are safe and effective. And yet, the United States may be reaching the point where mass vaccination transforms from a supply problem to a demand problem.

According to survey data from the RAND American Life Panel, public trust in the U.S. Centers for Disease Control and Prevention (CDC) fell by about 10 percent from May to October 2020, a critical stretch of the pandemic.

Notably, this decline was particularly significant among those who either planned to vote for a candidate other than Biden or did not plan to vote at all in the presidential election. This suggests that Americans' views of the CDC are now strongly politicized. As a result, the Biden administration may be facing an uphill battle as it tries to restore trust in the CDC among some Americans and convince them to get vaccinated.

Another recent RAND study explored how best to address vaccine hesitancy among Black Americans. For a population that has long faced discrimination, medical mistrust is a rational “survival mechanism,” said lead author Laura Bogart. That's why messaging that targets Black Americans should first acknowledge systemic racism as a justifiable reason for hesitancy, and then provide information about vaccine safety and efficacy.

For all groups, the messenger may be as important as the message. Researchers suggest that doctors, nurses, and other health care practitioners may be more effective ambassadors for the vaccine than elected officials.

“There's no wall high enough to keep any virus away. As our own vaccine supply grows to meet our needs—and we are meeting them—we will become an arsenal of vaccines for other countries—just as America was the arsenal of democracy in World War II.”

Beware “vaccine nationalism.” That was the takeaway from a 2020 RAND Europe report that warned against countries failing to focus on global coordination once a vaccine was available.

It's a message that resonates today, as India rapidly becomes the epicenter of the pandemic and other nations scramble to help.

As the president's remarks suggest, as long as the virus is not under control in all regions, there will continue to be both a human toll and a global economic cost associated with COVID-19. Our researchers estimate that vaccine nationalism could cost the world up to $1.2 trillion per year in GDP.

“A globally coordinated multilateral effort to fight the pandemic is key,” said lead author Marco Hafner, “not only from a public health perspective but also an economic one.”

“I will do everything in my power to protect the American people from this epidemic of gun violence. But it's time for Congress to act as well.”

The United States has endured a string of high-profile mass shootings this year. Among the most horrifying were back-to-back tragedies in March: A gunman killed eight people—six of whom were Asian American women—in the Atlanta area. Less than a week later, another shooter killed 10 people in a Colorado supermarket.

These events have renewed the national conversation about gun policy.

RAND researchers have been working to improve that debate and help inform the development of fair and effective gun policies through the sweeping Gun Policy in America initiative, one of the largest studies ever conducted on the topic.

Our experts regularly add new resources to the initiative's website. Just this week, we launched a new estimate of how many hospitalizations for firearm injuries occur in the United States—nearly 548,000 between 2000 and 2016—and an interactive tool that highlights state-level estimates.

“In my discussion with [Chinese] President Xi, I told him that we welcome the competition—and that we are not looking for conflict. But I made absolutely clear that I will defend American interests across the board.”

China was featured prominently in Biden's address, across a number of domains, as the president broke down the silos between foreign and domestic affairs in an increasingly connected world.

To compete with Beijing over the coming decades, it's essential for Washington to understand China's grand strategy and its potential long-term trajectory.

So where will America's preeminent competitor be by 2050?

A recent RAND report examines four possible scenarios for China's future: triumphant, ascendant, stagnant, and imploding. The authors conclude that either an ascendant or a stagnant China is most likely. And importantly, what kind of country China becomes is not completely beyond U.S. influence.

“The American Families Plan guarantees four additional years of public education for every person in America—starting as early as we can. We add two years of universal high-quality pre-school for every three- and four-year-old in America.

“The research shows that when a young child goes to school—not day care—they are far more likely to graduate from high school and go on to college.”

An extensive body of RAND research has produced a clear takeaway: High-quality programs that help young children learn and grow can transform their lives for the better. Such programs can also save money in the long run.

High-quality early childhood education can improve a wide range of positive outcomes for kids—some of which may pay dividends well into adulthood—and produce economic returns of $2 to $4 for every dollar invested.

But the operative word is high-quality. “Forty kids and a ball,” as RAND adjunct economist M. Rebecca Kilburn puts it, won't produce the same results as evidence-based programs that are run well. High-quality programs require significant resources, but evidence suggests that investment—when accompanied by ongoing efforts to measure and maintain quality—can pay off.

“After 20 years of American valor and sacrifice, it's time to bring our troops home.”

Dobbins has written extensively about the potential consequences of a precipitous U.S. departure from Afghanistan that is unrelated to a peace settlement.

More recently, Dobbins said the following about the president's decision to pull all troops out by September 2021: “The result will be a blow to American credibility, the weakening of deterrence and the value of American reassurance elsewhere, an increased terrorist threat emanating from the Afghan region, and the distinct possibility of a necessary return.”

The Future of U.S. Infrastructure

There are indeed problems with U.S. infrastructure that need to be addressed. However, a 2017 RAND report finds that “not everything is broken” with transportation and water infrastructure funding and finance. What's most important is reaching a consensus on priorities, accompanied by targeted spending and policy changes.

Lead author Debra Knopman warned against “spreading federal dollars around to fund short-term, 'shovel-ready' projects without a sense of national purpose or priority.” That will not get the United States where it needs to be, she said.

More recently, RAND experts have discussed one alternative road funding idea that has received significant attention, a vehicle miles traveled fee that charges motorists based on how far they drive.

“The VMT fee fulfills the conservative principle of people paying directly for services they use,” they write, “as well as the liberal principle of tax burdens being shared more equitably because the people driving highly efficient cars tend to be more affluent.”

Brand-name drugs are the primary driver of America's higher prescription drug prices. For branded drugs, U.S. prices were 3.44 times those in comparison nations, on average. Prices for generic drugs, on the other hand, are slightly lower in the United States than in most other countries.

Transparency about prices may help address this problem.