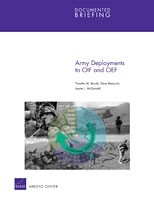 Army Deployments to OIF and OEF

In light of some publicly voiced misconceptions regarding the Army's capacity to deploy additional soldiers to Operation Enduring Freedom (OEF) and Operation Iraqi Freedom (OIF), RAND Arroyo Center was asked to assess the demands placed upon the Army by these deployments. Analyzing Department of Defense deployment data, Arroyo found that the Army has provided over 1 million troop-years to OIF and OEF, and that most active-duty soldiers now deployed to these operations are on their second or third tour. Those active-duty soldiers who have not yet gone to Iraq or Afghanistan typically fall into one of two categories: new soldiers, needing to complete training before deployment; and experienced soldiers, needed for other missions. The demand for active duty soldiers in OEF and OIF would have exceeded supply under the Army's normal deployment policies, so the Army and the Department of Defense took several actions to increase supply: it increased the overall size of the active component; it reassigned soldiers from other assignments and missions to the pool of soldiers rotating to OEF and OIF; and it greatly increased the rate at which soldiers rotate to and from the wars. Despite these adaptations, the Army retains very limited unutilized capacity to deploy additional active-duty soldiers beyond the current troop levels in OEF and OIF.

The research described in this report was sponsored by the United States Army and conducted by the RAND Arroyo Center.