How Well Are Sailors Taking Care of Themselves 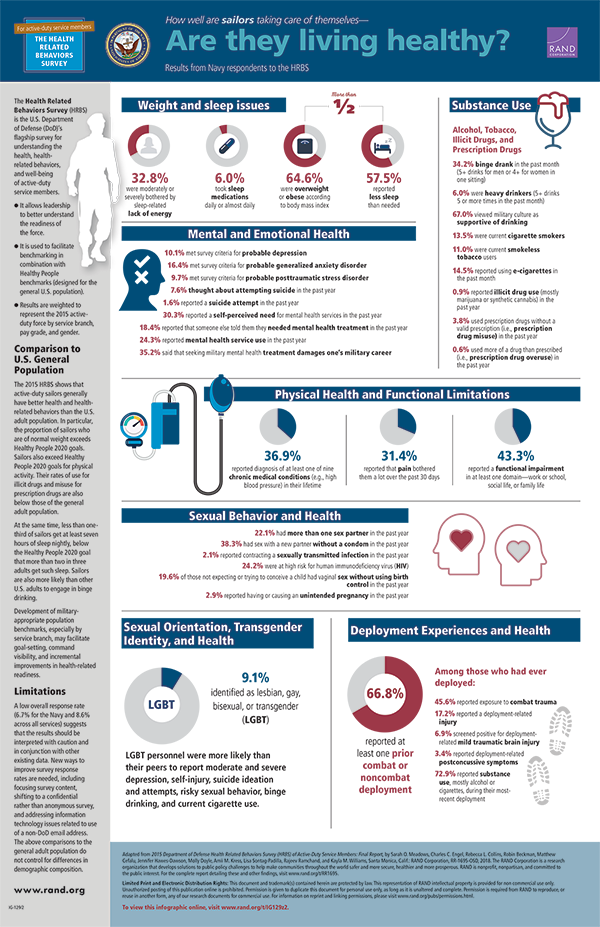 How well are sailors taking care of themselves — Are they living healthy?

Results from Navy respondents to the HRBS

66.8% reported at least one prior combat or noncombat deployment

The 2015 HRBS shows that active-duty sailors generally have better health and health-related behaviors than the U.S. adult population. In particular, the proportion of sailors who are of normal weight exceeds Healthy People 2020 goals. Sailors also exceed Healthy People 2020 goals for physical activity. Their rates of use for illicit drugs and misuse for prescription drugs are also below those of the general adult population.

At the same time, less than one-third of sailors get at least seven hours of sleep nightly, below the Healthy People 2020 goal that more than two in three adults get such sleep. Sailors are also more likely than other U.S. adults to engage in binge drinking.

A low overall response rate (6.7% for the Navy and 8.6% across all services) suggests that the results should be interpreted with caution and in conjunction with other existing data. New ways to improve survey response rates are needed, including focusing survey content, shifting to a confidential rather than anonymous survey, and addressing information technology issues related to use of a non-DoD email address. The above comparisons to the general adult population do not control for differences in demographic composition./