How Well Are Service Members Taking Care of Themselves 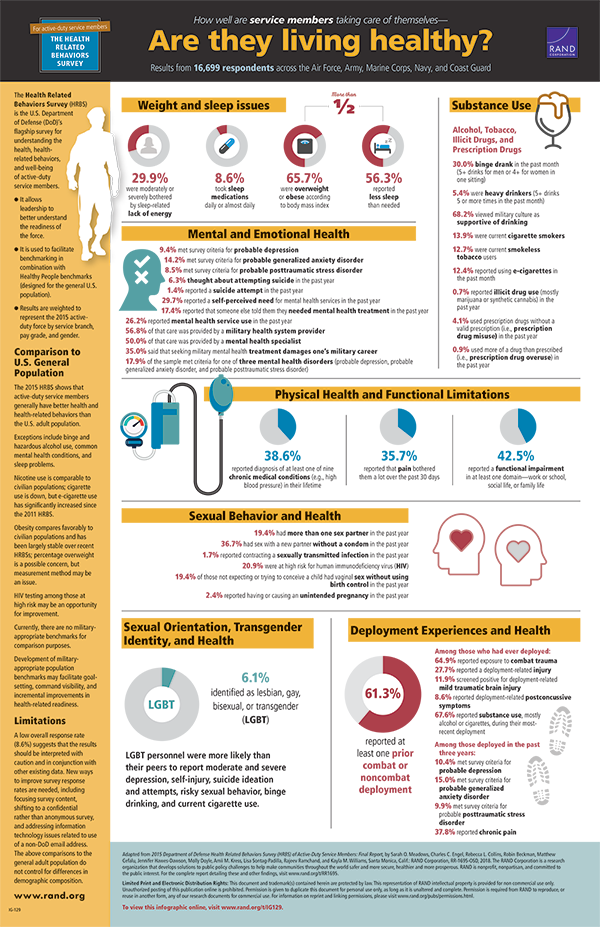 How well are service members taking care of themselves — Are they living healthy?

61.3% reported at least one prior combat or noncombat deployment

Among those deployed in the past three years:

The 2015 HRBS shows that active-duty service members generally have better health and health-related behaviors than the U.S. adult population.

Nicotine use is comparable to civilian populations; cigarette use is down, but e-cigarette use has significantly increased since the 2011 HRBS.

Obesity compares favorably to civilian populations and has been largely stable over recent HRBSs; percentage overweight is a possible concern, but measurement method may be an issue.

HIV testing among those at high risk may be an opportunity for improvement.

Currently, there are no military-appropriate benchmarks for comparison purposes.

A low overall response rate (8.6%) suggests that the results should be interpreted with caution and in conjunction with other existing data. New ways to improve survey response rates are needed, including focusing survey content, shifting to a confidential rather than anonymous survey, and addressing information technology issues related to use of a non-DoD email address. The above comparisons to the general adult population do not control for differences in demographic composition.