RAND researchers report key findings from the 2015 Health Related Behaviors Survey of active-duty service members. The report details the survey's methodology and sample demographics, as well as policy implications. The results are intended to supplement data already collected by the Department of Defense and to inform policy initiatives to help improve the readiness, health, and well-being of the force. 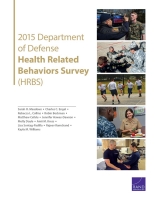 The Health Related Behaviors Survey (HRBS) is the U.S. Department of Defense's flagship survey for understanding the health, health-related behaviors, and well-being of service members. In 2014, the Defense Health Agency asked the RAND Corporation to review previous iterations of the HRBS, update survey content, administer a revised version of the survey, and analyze data from the resulting 2015 HRBS of active-duty personnel, including those in the U.S. Air Force, Army, Marine Corps, Navy, and Coast Guard. This report details the methodology, sample demographics, and results from that survey in the following domains: health promotion and disease prevention; substance use; mental and emotional health; physical health and functional limitations; sexual behavior and health; sexual orientation, transgender identity, and health; and deployment experiences and health. The results presented here are intended to supplement data already collected by the Department of Defense and to inform policy initiatives to help improve the readiness, health, and well-being of the force.

Notable Results Among the Active-Duty Population

This research was sponsored by the Defense Health Agency and conducted within the Forces and Resources Policy Center of the RAND National Defense Research Institute, a federally funded research and development center sponsored by the Office of the Secretary of Defense, the Joint Staff, the Unified Combatant Commands, the Navy, the Marine Corps, the defense agencies, and the defense Intelligence Community.