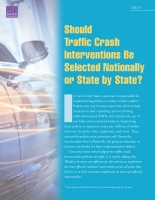 Should Traffic Crash Interventions Be Selected Nationally or State by State?

In the United States, each state is responsible for implementing policies to reduce vehicle crashes.[1] Policies can vary between states but often include measures to deter speeding, prevent driving while intoxicated (DWI), and increase the use of seat belts and motorcycle helmets. Supporting these policies is expensive; states pay millions of dollars each year for police time, equipment, and more. Thus, state policymakers must prioritize and choose the interventions that will provide the greatest reduction in injuries and deaths for their implementation dollars.

This research brief answers these questions with the data set used to develop the Motor Vehicle Prioritizing Interventions and Cost Calculator for States (MV PICCS). MV PICCS is a free-to-use tool to help policymakers prioritize and choose the traffic crash interventions that reduce the number of injuries and deaths for a given state budget. The RAND Corporation created MV PICCS with funding and technical support from the Centers for Disease Control and Prevention's (CDC's) National Center for Injury Prevention and Control and the Robert Wood Johnson Foundation. It is available at the CDC website: www.cdc.gov/motorvehiclesafety/calculator.

The Costs of Traffic Crashes: Lives, Well-Being, and Money

Traffic crashes remain a leading cause of death in the United States. We know that, in 2013, for example, they killed 32,719 Americans. And even when crash victims survive, they can find themselves negatively affected for a long time after: More than 2.3 million were injured in motor vehicle crashes in 2013. The direct and indirect costs of lives lost and harmed are typically higher than the millions of dollars the nation spends on prevention: In 2010, for example, crash-related costs reached about $242 billion.

How Cost-Effective Are Traffic Crash Interventions?

We conducted our analysis of costs and effectiveness on 11 interventions that have proven effective at saving lives and preventing injuries. We present them in Table 1. Cost refers to costs to the state for implementing an intervention; effectiveness refers to the number of lives saved and injuries prevented, as well as the estimated monetary value of saving a life and preventing an injury. These values include emergency and ongoing medical care and lost productivity and vary by state.

A National Approach to Funding Traffic Crash Interventions Is Relatively Inexpensive, but Not All States Benefit Equally

The results of this exercise suggest that increasing the use of alcohol interlocks on a national basis can save the most lives for the least cost. This policy alone could prevent 93 fatalities and 3,352 injuries in the first year of implementation. Implementing the policy costs $1.4 million. This is a relatively low cost for two reasons: Alcohol interlocks are fairly inexpensive for states, and only 12 states would need to adopt this policy. Implementing alcohol interlock laws in just these 12 states would ultimately save more than $185 million in crash-related costs.

The total effectiveness increases considerably if we add in universal motorcycle helmet laws in the 30 states that do not currently have them. This would save 745 lives and prevent nearly 200,000 injuries. This is almost as cost-effective as alcohol interlocks. The other four interventions have much lower cost-effectiveness ratios.

Why Do Costs and Effects Vary Across States for the Same Interventions?

The costs and effects of traffic crash interventions vary from state to state because each state has different safety needs and resources. For example, the cost of implementing an intervention depends on factors that include state size and number of roadways, police-officer wages, and characteristics of the driving population, such as age. The effects can also vary because states have different crash profiles. For example, some states have hundreds of motorcycle deaths per year, while others have only a dozen. Because the number of motorcycle crashes varies from state to state, the effects of helmet laws will vary as well.

Moreover, states without these laws stand to benefit most because they have higher ratios of motorcycle fatalities. In 15 states, motorcycle deaths made up 15 percent or more of all vehicle crash deaths (the national average is about 13.5 percent); of these, only three have helmet laws already. Texas stands to benefit the most: A universal motorcycle helmet law could prevent 120 deaths and nearly 31,800 injuries in the first year after implementation. Across all 24 states where helmet laws are ranked first for cost-effectiveness ratios, 605 lives could be saved. An additional 140 lives would be saved in the other six states that do not currently have universal motorcycle helmet laws in place.

The map shows the top intervention for each state. Table 3 presents the costs and benefits of each intervention.

There is not a clear-cut one best way to allocate traffic safety money among the states. It is actually relatively cost-effective overall to implement the top-ranked intervention in each state: nearly $82 in benefit for every $1 spent. The federal government can save nearly double the number of lives if it implements the same six interventions in all states that lack them, but this costs $157 million, as opposed to $59 million. If the focus is on saving the greatest number of lives with a single intervention, the federal government would fund universal motorcycle helmet laws in the 30 states without them; this would save almost 750 lives and prevent 200,000 injuries for $41 million, or $122 in benefits for every $1 spent. 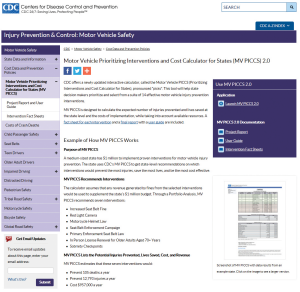