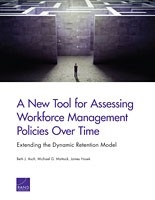 A New Tool for Assessing Workforce Management Policies Over Time

The dynamic retention model (DRM) is a state-of-the-art modeling capability that supports decisionmaking about workforce management policy. The DRM can be applied in a wide variety of workforce contexts for a variety of compensation and personnel policies, though to date the focus has been on supporting military compensation decisions to sustain the all-volunteer force in the United States. While the DRM is an extremely powerful tool, a drawback in the use of the model to date is that it has focused on the steady state. That is, implementations of the model to date show only the retention and cost effects of alternative policies when the entire workforce is under the new policy versus when the workforce is under existing policy. The research presented in this report extends DRM to allow simulations of the effects of alternative policies both in the steady state and in the transition to the steady state. It also shows the effects of alternative implementation strategies and how different policies can affect how quickly the population and costs move toward the new steady state.

The Capability Is Already Being Applied by Related RAND Projects