To what degree is the suicide trend in the U.S. Army unique to that service, relative to what is observed in the general U.S. population? Researchers investigate how accounting for additional population risk factors beyond age and gender (race/ethnicity, time, marital status, and educational attainment) affects suicide rate differences between soldiers and a comparable subset of the general U.S. population. 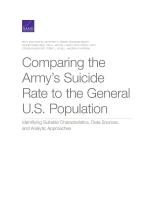 Comparing the Army's Suicide Rate to the General U.S. Population

Over the past 15 years, the suicide rate among members of the U.S. armed forces has doubled, with the greatest increase observed among soldiers in the Army. This increasing rate is paralleled by a smaller increase in the general U.S. population, observed across both genders, in virtually every age group and in nearly every state. An empirical question exists: What is the extent or degree to which the suicide trend in the Army is unique to that service, relative to what is observed in the general U.S. population?

The Army has typically attempted to address this question by standardizing the general population to look like the Army on demographic characteristics. However, given the rise in suicide rates over the past decade, the Army wanted to better understand whether standardization based solely on age and gender is enough. Expanding the characteristics on which the general population is standardized to match the Army could be useful to gain a better understanding of the suicide trends in the Army. However, such a change also brings with it some challenges, including the lack of readily available data in the general U.S. population. In addition, even an expanded set of characteristics still results in having a large number of unmeasured factors that cannot be included in this type of analysis.

In this report, the authors explore how accounting for age, gender, race/ethnicity, time, marital status, and educational attainment affects suicide rate differences between soldiers and a comparable subset of the general U.S. population.

Matchable, comparable factors between the Army and the general U.S. population are needed

Using an expanded set of factors reveals that the expected suicide rate in the general U.S. population is consistently lower than when adjusting for age and gender only

Occupation coding needs to be improved to compare the Army with the general U.S. population

Mental health diagnoses need to be examined and standardized

The research described in this report was sponsored by the United States Army and conducted by the Personnel, Training, and Health Program within the RAND Arroyo Center.