The authors describe the behavioral health of racial/ethnic minority, women, and sexual-minority service members relative to their majority-group peers and examine minority–majority group differences in the military versus civilian populations. Understanding whether minority-group service members experience differences in behavioral health can help the U.S. Department of Defense target its efforts to improve force readiness. 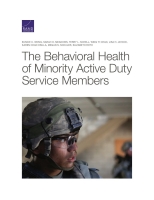 To investigate this issue, the authors examined (1) whether minority-group service members are more likely to experience mental health and substance use problems relative to their majority counterparts in the military and (2) whether minority–majority group differences in behavioral health in the military are similar to or different from those in the civilian population.

The authors used data from the 2015 Health Related Behaviors Survey, the 2015 National Survey on Drug Use and Health, the 2015 and 2016 Behavioral Risk Factor Surveillance System, and the 2015 National Health and Nutrition Examination Survey. Behavioral health outcomes include mental health (e.g., depression, suicide behaviors, posttraumatic stress disorder) and substance use (e.g., problematic alcohol use, tobacco use) conditions.

Minority–majority group differences in behavioral health in the military are similar to those in the civilian world, but there are a small number of differences

This research was sponsored by the Psychological Health Center of Excellence and conducted within the Forces and Resources Policy Center of the RAND National Security Research Division (NSRD).