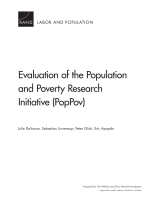 Evaluation of the Population and Poverty Research Initiative (PopPov)

Since 2005, the William and Flora Hewlett Foundation, with collaboration and co-funding from research councils in the United Kingdom, the Netherlands, France, and Norway and from the World Bank, has invested in a portfolio of social science research on the relationship between population dynamics and micro- and macroeconomic outcomes. It is known as the Population and Poverty Research Initiative (PopPov), and its geographic focus is on sub-Saharan Africa (SSA). The starting premises that led to the development of PopPov were that evidence showing that population dynamics could affect economic outcomes might increase the interest of ministers of finance in funding population policies and that they might be most convinced by rigorous research done by respected economists. The core aim of the program has been to build or rebuild and advance the field of economic demography, orienting the work toward research that would be relevant for policy and would increase recognition by economic policymakers of the value of lowering the rate of population growth and investing in family planning. The program also aimed to strengthen the capacity of researchers in SSA. PopPov tried to achieve these aims through four main components: (1) grants to support research on PopPov core topics of interest, (2) fellowships to support graduate students preparing their doctoral dissertations, (3) conferences and workshops to support the development of networking opportunities, and (4) other dissemination activities. This report provides results of a RAND Corporation evaluation of PopPov.

Published Papers Do Not Proportionately Focus on PopPov Areas of Emphasis

The research described in this report was sponsored by the William and Flora Hewlett Fondation and was conducted by RAND Labor and Population.