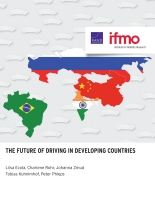 The Future of Driving in Developing Countries

The level of automobility, defined as travel in personal vehicles, is often seen as a function of income: The higher a country's per capita income, the greater the amount of driving. However, levels of automobility vary quite substantially between countries even at similar levels of economic development. This suggests that countries follow different mobility paths. The research detailed in this report sought to answer three questions: What are the factors besides economic development that affect automobility? What is their influence on automobility? What will happen to automobility in developing countries if they progress along similar paths as developed countries? To answer these questions, the authors developed a methodology to identify these factors, model their impact on developed countries, and forecast automobility (as defined by per capita vehicle-kilometers traveled [VKT]) in four developing countries. This methodology draws on quantitative analysis of historical automobility development in four country case studies (the United States, Australia, Germany, and Japan) that represent very different levels of per capita automobility, in combination with data derived from an expert-based qualitative approach. The authors used the latter to assess how these experiences may affect the future of automobility in the BRIC countries: Brazil, Russia, India, and China. According to this analysis, automobility levels in the four BRIC countries will fall between those of the United States (which has the highest per capita VKT level of the four case studies) and Japan (which has the lowest). Brazil is forecasted to have the highest per capita VKT and India the lowest.

These Factors Are Correlated with Automobility

Developing Countries Are Forecasted to Have a Range of Automobility Outcomes

The research described in this report was sponsored by the Institute for Mobility Research (ifmo) and conducted in the Transportation, Space, and Technology Program within RAND Justice, Infrastructure, and Environment.