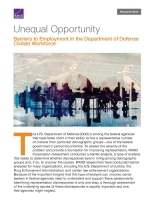 Barriers to Employment in the Department of Defense Civilian Workforce 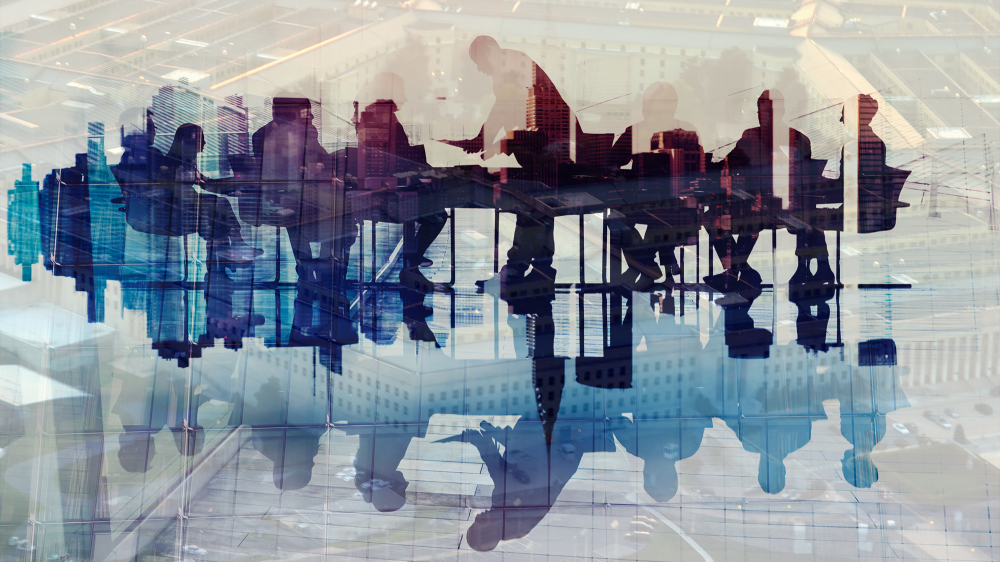 The U.S. Department of Defense (DoD) is among the federal agencies that have fallen short in their ability to hire a representative number of civilians from particular demographic groups—one of the federal government's personnel priorities. To assess the severity of the problem and provide a foundation for improving representation, RAND Corporation researchers conducted a barrier analysis, a type of analysis that seeks to determine whether discrepancies exist in hiring among demographic groups and, if so, to uncover the causes. RAND researchers have conducted barrier analyses for many organizations, including the U.S. Department of Justice, the Drug Enforcement Administration, and civilian law enforcement organizations. Because of the important insights that this type of analysis can uncover, senior leaders in federal agencies need to understand and support these assessments. Identifying representation discrepancies is only one step; a thorough assessment of the underlying causes of these discrepancies is equally important and one that agencies might neglect.

To draw on RAND's expertise in conducting barrier analyses, the Office of Diversity Management and Equal Opportunity within the Office of the Secretary of Defense asked RAND to conduct a systematic assessment of two groups of interest to DoD: Hispanics and people with targeted disabilities (PWTDs).

The researchers' assessments showed underrepresentation in the civilian DoD workforce for both groups. Using analysis of relevant quantitative data, interviews with and a survey of hiring managers and supervisors, and interviews with other experts, the team identified employment barriers and actions that DoD can take to address them. This brief summarizes the results.

Recent Office of Personnel Management (OPM) reports have shown underrepresentation of Hispanics in the federal government in comparison with the U.S. labor force. These reports have also shown that, in comparison with other departments in the federal government, DoD has one of the lowest proportions of Hispanics in its workforce. These analyses, however, do not sufficiently consider what might have contributed to limited DoD employment of this group. Thus, identifying these employment barriers became the focus of the barrier analysis.

Hispanic Representation in the Department of Defense Workforce

In 2013, 6.5 percent of DoD employees were Hispanic citizens, much less than the 9.3 percent among other federal civilian workers and 11.4 percent of the civilian labor force (if the analysis includes noncitizens as well, the latter percentage goes up to 15.6 percent). Hispanic representation in the civilian labor force and the non-DoD federal civilian workforce also increased more rapidly from 2008 to 2013 than its DoD counterpart. These discrepancies between the number of Hispanics in the DoD civilian workforce and elsewhere indicate possible employment barriers.

Different parts of DoD vary in employment of Hispanics. In 2013, the Department of the Army had the highest proportion of Hispanics among civilian workers (7.4 percent), while the non-military department DoD entities (i.e., the Fourth Estate) had the lowest: 5.2 percent.

In addition to data on overall workforce participation for Hispanics, other measures indicate possible employment barriers. Hispanics made up 5.2 percent of new hires but 6 percent of exits in the DoD workforce from 2008 to 2013. They were more concentrated in occupations with lower rates of promotion and were less likely to be promoted in occupations with higher rates of promotion. Hispanics made up 8.0 percent of the DoD civilian workforce in General Schedule lower grades, 6.0 percent in middle grades, and 4.5 percent in upper grades.

What Is Barrier Analysis?

Barrier analysis is a systematic assessment approach that can be used to identify potential obstacles to obtaining resources, participating in a program, or working in an organization. One use of barrier analysis is to help employers understand diversity-related challenges in their workforces. Employment barriers can occur at any stage of the career life cycle—recruitment, hiring, promotion, and retention practices—and barrier analysis helps examine each key point.

Why Are Hispanics Underrepresented?

To begin to answer this question, the team analyzed whether any particular differences between the Hispanic workforce, the non-DoD federal workforce, and the civilian labor force might explain Hispanic underrepresentation in DoD. The results show that characteristics of the Hispanic workforce in general—education, citizenship, veteran status, age, location, and occupation—explain nearly the entire gap in Hispanic presence in the civilian labor force (15.6 percent) versus the DoD civilian workforce (6.3 percent) (see Figure 1). Only a gap of 0.7 percentage points is unexplained.

Also, analysis of job-applicant data suggests that Hispanics are underrepresented throughout the hiring process and that their participation decreases as the process progresses. Analyses of DoD job characteristics might explain why fewer Hispanics apply and are subsequently hired for jobs. Among DoD jobs offered in 2014, job location has perhaps the greatest effect. Jobs in states that, like New Mexico, have higher proportions of Hispanics in the general population, are more likely to receive Hispanic applicants than jobs elsewhere. There is also some evidence that Hispanic DoD applicants might be more interested in work requiring less education or experience—perhaps because Hispanics in the civilian labor force, on average, are younger and less educated than non-Hispanics. Similarly, jobs at higher pay grades were less likely to receive Hispanic applicants.

During interviews with the research team, DoD representatives pointed to other potential barriers to Hispanic employment. The most–frequently mentioned include geographic location of positions (also observed in our analyses of job characteristics, described above), perceptions of language or citizenship barriers, a lack of awareness and motivation from leaders and managers to address Hispanic underrepresentation, and few hiring strategies specifically targeting Hispanics. In addition, DoD representatives observed that potential applicants perceive the USAJOBS process by which people apply for federal positions to be cumbersome and time-consuming, which might deter applicants from applying and make it difficult for DoD to compete with the private sector for these workers.

Representatives from Hispanic-serving institutions (HSIs), which are not-for-profit institutions where Hispanic enrollment is a minimum of 25 percent of the total enrollment, echoed the complexity of the application process as a potential barrier. They also noted that DoD engagement with their students was limited. Other potential barriers they cited included students’ lack of awareness of DoD civilian opportunities and students’ reluctance to relocate to new areas. To overcome this reluctance, HSI representatives suggested, DoD should connect with students’ families when possible and work to build networks for new employees once relocated.

The researchers’ findings suggest several potential options that DoD might pursue in assessing and improving Hispanic representation in the DoD civilian workforce. These recommendations address each phase of the employment cycle, from outreach to retention:

DoD is also interested in better understanding representation of PWTDs in its civilian workforce and how to improve it. Different national data sets use different definitions of disability, and that appears to influence representation levels in those data sets. Those discrepancies hinder comparison of federal workforce representation levels with those seen in the U.S. national data sets. Given that, the U.S. Equal Employment Opportunity Commission has established a 2-percent representation goal for PWTDs in the federal civilian workforce. Participation rates lower than this goal indicate possible barriers to employment within DoD.

Representation of People with Targeted Disabilities in the DoD Workforce

However, for people with any disabilities—not limiting the data to those with targeted disabilities—levels of representation in DoD met or exceeded those seen in the non-DoD federal workforce. This appears to be due to relatively high levels of employment in DoD of veterans with disabilities. If these veterans have targeted disabilities that have not been reported, the reported data would underestimate the number of PWTDs in DoD’s civilian workforce.

A survey can be used to examine attitudes and perceptions toward a group of interest in the workforce, obtain recent information about employee knowledge of relevant employment policies and practices, and assess perceptions and experiences relevant to employment aspects addressed in an organization’s operational plan. Drawing from the PWTD survey and previous research, we list several broad topic areas, and example questions, that organizations might use in a survey (see the table below).

Why Are People with Targeted Disabilities Underrepresented?

Interviews with DoD representatives highlighted challenges to the employment of PWTDs. When asked what contributed to low PWTD-representation rates, more than half of interviewees named unconscious prejudice (implicit bias) against PWTDs, making it the most frequently mentioned potential barrier. A data limitation that some interviewees noted was that employees with targeted disabilities, particularly those who are veterans, are reticent to disclose their disability status.

The researchers’ survey of DoD civilian hiring managers and supervisors provided additional perspective. Overall, the responses suggest that harmful behaviors toward PWTDs in DoD are rare and that perceptions of PWTDs in DoD are broadly positive. For example, respondents perceived that incivility toward PWTDs is uncommon in DoD, as the responses to four survey items in Figure 3 illustrate. However, few appear to be familiar with goals and policies for employment of PWTDs. Only 17 percent correctly indicated that the employment goal for PWTDs was 2 percent, a statistic that supports interview comments regarding limited awareness among hiring managers.

Communication of goals for employing PWTDs, holding employees accountable for creating a positive work environment for PWTDs, and higher frequency of high-quality interactions with PWTDs were associated with more-positive perceptions of PWTDs. Although respondents did not show a strong consensus on the impact of specific barriers, they reported perceiving limited information available about how to enhance employment rates of PWTDs and lack of requisite skills among applicants with targeted disabilities to be stronger barriers than, for example, negative attitudes toward or stereotypes of PWTDs.

The assessment suggests several potential ways to assess and improve representation of PWTDs in the DoD civilian workforce:

The assessments of the Hispanic population and the population of PWTDs within DoD highlighted a variety of reasons that these groups tend to be underrepresented in the DoD workforce. The recommendations identify ways in which existing barriers might be overcome to increase representation of these groups in the DoD civilian workforce. There is a final recommendation common to each assessment that applies to any action DoD takes to address representation challenges for these groups: Systematically evaluate DoD efforts to promote employment for Hispanics and PWTDs to determine whether those efforts have an impact. Well-planned and carefully executed evaluation efforts can inform the actions DoD takes to address representation in its workforce.