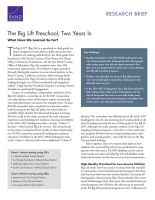 What Have We Learned So Far?

The Big Lift™ (Big Lift) is a preschool to third-grade initiative designed to boost literacy skills and ensure that children are reading proficiently by the third grade. First launched in 2012 by the County of San Mateo, the Silicon Valley Community Foundation, and the San Mateo County Office of Education, Big Lift comprises more than 300 community organizations. The initiative targets preschool through third-grade students in seven school districts in San Mateo County, California, that have below-average third-grade reading levels. Big Lift seeks to improve third-grade reading through a set of four coordinated and integrated "pillars": High-Quality Preschool, Summer Learning, School Attendance, and Family Engagement.

As part of a multiphase, independent evaluation of the Big Lift initiative, researchers at the RAND Corporation are undertaking a series of descriptive reports on participation and achievement outcomes over multiple years. To date, RAND researchers have completed two outcome studies, both focusing on the Big Lift pillars for which data are available: High-Quality Preschool and Summer Learning. The first study in this series examined the early education experiences and kindergarten readiness outcomes of children in the 2016–2017 kindergarten class — in four "Cohort 1" districts — who received Big Lift services. The second study in this series, summarized here, builds on these initial analyses. RAND researchers examined kindergarten readiness outcomes of children in the 2017–2018 kindergarten class in the Cohort 1 districts and in three additional "Cohort 2" districts. The researchers also followed up on the 2016–2017 kindergarten class by documenting their reading skills at the end of kindergarten and the start of first grade in the fall of 2017. Although the study contains analyses of the Big Lift Inspiring Summer program — a free five- or four-week summer program for lower-income rising kindergartners, first-graders, and second-graders — this brief focuses on the Big Lift preschool findings.

Taken together, these two reports shed light on how children who received Big Lift services performed in comparison with their peers. RAND's findings can be used to track trends over time and help Big Lift stakeholders make informed decisions on how best to serve their communities.

How Do Big Lift Preschoolers Fare in Kindergarten Compared with Their Demographically Similar Peers?

The researchers also found that Big Lift preschoolers in the 2017–2018 kindergarten class scored lower (on average by four points) on the Brigance than children who attended non–Big Lift early education programs (see Figure 1). This finding was not consistent with the results of RAND's earlier study, which found that Big Lift and non–Big Lift preschoolers in the 2016–2017 kindergarten class were equally likely to be kindergarten-ready, but the available data did not point to a definitive explanation for this difference. It is worth noting that children who attended Big Lift preschools came from families who faced more social disadvantages than their peers in the comparison groups. Although the analysis controls for some of the ways in which Big Lift and non–Big Lift children differ from each other, it is not possible to control for all the ways in which they may differ. Given that measured demographic characteristics were similar across the 2016–2017 and 2017–2018 kindergarten classes, unmeasured differences between the two classes — for example, parents' educational expectations or changes in the quality or nature of Big Lift or non–Big Lift preschool programs — may be factors that help explain this pattern of results.

Do Big Lift Preschoolers Still Have a Cognitive Advantage at the End of First Grade?

Will these patterns hold true for future Big Lift participants? Subsequent annual descriptive analyses will make it possible for RAND researchers to track these and other trends as they evolve and emerge over time and across multiple kindergarten classes. By 2019, for example, there will be three school years' worth of longitudinal data on the 2016–2017 kindergarten class that will provide insight into how Big Lift children's skills grow as they progress through school and how students who receive Big Lift services compare with similar peers who do not. Subsequent analyses will also continue to explore participation in other Big Lift programs, such as summer learning.

The findings from RAND's first two outcome studies are promising: They suggest that Big Lift preschool can promote not only kindergarten readiness but also continued success throughout a child's early school career. Although our analyses do not allow us to test the causal impact of Big Lift preschool on children, they nonetheless provide insight into how children who attended Big Lift preschool fared compared with demographically similar peers.