China's missile program is arguably the most active in the world and has provided the PLA with the ability to launch hundreds of ballistic and cruise missiles at air bases and other critical targets in Taiwan, Japan, or the Philippines. The PLA is also able to strike targets as distant as Guam with air-launched cruise missiles. In a conflict, these capabilities would challenge the U.S. ability to operate safely or efficiently from forward air bases and would have major spillover effects on other parts of the battle. To mitigate this threat, the United States should pursue a combination of measures to improve operational resilience, including dispersed basing, base hardening, missile defenses, and new operating techniques that limit the impact of attacks on flight operations.

Over the past two decades, China's People's Liberation Army (PLA) has transformed itself from a large but antiquated force into a capable, modern military. A RAND Project AIR FORCE report assesses trends in the relative capabilities of U.S. and Chinese forces in diverse operational areas, and at varying distances from the Chinese mainland, between 1996 and 2017. The overall conclusion is that although China continues to lag behind the United States in terms of aggregate military hardware and operational skills, it has improved its capabilities relative to those of the United States in many critical areas. Moreover, the report finds that China does not need to catch up fully to the United States to challenge the U.S. ability to conduct effective military operations near the Chinese mainland. To be clear, the goal is to avoid war, which the authors do not anticipate and which would be disastrous for both countries. Rather, this research provides an open-source assessment of trends that could affect U.S. defense and deterrence efforts and establishes a baseline for future analysis.

This brief focuses on one area in which China has made rapid and substantial relative improvements: the ability to disrupt or degrade U.S. air operations by attacking air bases.

In 1996, China had only a handful of short-range ballistic missiles (SRBMs) capable of striking targets in Taiwan and Korea. PLA missiles could not reach U.S. bases in Japan, and poor accuracy limited their military utility. Today, the PLA has the most active ballistic-missile program in the world and deploys more than 1,200 SRBMs, alongside medium-range ballistic missiles and ground-launched cruise missiles capable of targeting U.S. bases and other facilities in Japan. Chinese air-launched cruise missiles (ALCMs) pose at least some threat to Guam, roughly 3,000 km from the Chinese coast. If and when China deploys conventionally armed intermediate-range ballistic missiles (IRBMs), as it has said it will do, Guam's vulnerability will greatly increase. As important as numbers and ranges, Chinese missile accuracy has also improved dramatically, enabling the force to target critical U.S. facilities. The evolution of missile threats is illustrated in the figure. 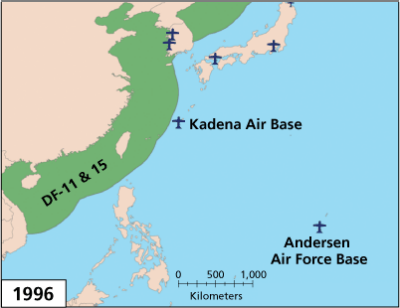 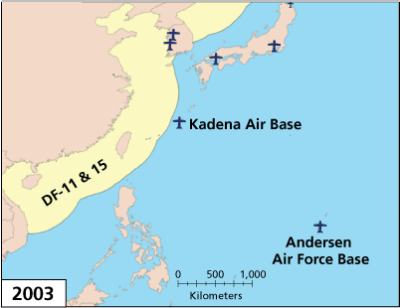 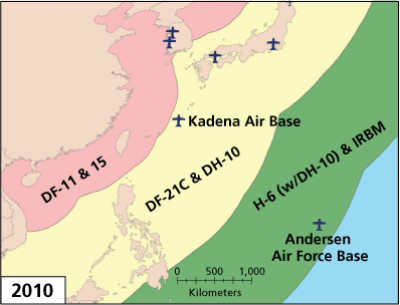 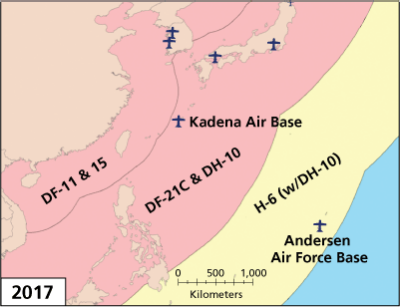 Two types of attacks were modeled, with runways targeted in the first case and aircraft parked at the air base targeted in the second. The discussion here is limited to runway attacks, with the major output being the number of days that U.S. air bases would be closed. These results are not intended to represent fully developed or precise predictions. But given the consistency of the methodology applied over the period considered, they provide a good indicator of trends over time, as well as an idea of the general scale of the challenge at any given point in time.

The analysis of the Taiwan case focuses on attacks against the Kadena Air Base, which is the only major U.S. air base within unrefueled range of the Taiwan Strait. Using baseline assumptions,[1] the analysis indicates that China would have been able to close Kadena to fighter operations in a Taiwan scenario for four to ten days in 2010. Closure times increase with the expansion and improvement of China's missile inventory: In 2017, China might shut down operations at Kadena for 16–43 days, though the latter figure would imply a single-minded focus on Kadena at the expense of striking other targets or holding missiles in reserve. Missile attacks against U.S. air bases would have significant spillover effects into the air superiority contest. And given the importance of airpower in Asian scenarios, the tertiary effects on other parts of the battle could also be significant.

Chinese attacks on air bases would cause relatively less disruption — and have fewer consequences — in the Spratly Islands scenario. As in the Taiwan case, however, the challenges posed to air base operations by Chinese missiles are growing. In the Spratly Islands scenario, bases on Guam and Mindanao would be as important as Kadena. These bases are farther from China, and, in 2010, Chinese attacks on them would have been limited to bombers firing ALCMs. In such attacks, some portion of both the shooters and missiles might have been brought down in flight. The likely future addition of IRBMs, however, will give China the ability to attack relevant bases with less warning and greater effect.

The evolution of Chinese missile capabilities poses a serious and growing threat to U.S. air operations in both scenarios examined. To an extent, U.S. countermeasures could mitigate the threat. For example, dispersing aircraft across more bases would increase the number of runways that China would have to attack. Deception, mobility, and the ability to counter intelligence, surveillance, and reconnaissance capabilities would make it more difficult for the PLA to target aircraft on the ground. Hardening would force China to individually attack aircraft parked inside shelters, rather than wholesale on the tarmac. Aircraft in shelters might also create uncertainty about the location of U.S. assets, especially under wartime conditions. And even modestly effective missile defenses could force China to allocate more missiles per salvo, depleting the Second Artillery's missile inventory faster. These changes would require a concerted effort, and they would take time to implement. Should an actual conflict begin before they are in place, it will be too late to make such adjustments.