Relative Capabilities and the Evolving Balance of Power, 1996–2017

Over the past two decades, China's People's Liberation Army (PLA) has transformed itself from a large but antiquated force into a capable, modern military. Although China continues to lag behind the United States in terms of aggregate military hardware and operational skills, it has improved its capabilities relative to those of the United States in many critical areas. Moreover, China does not need to catch up fully to the United States to challenge the U.S. ability to conduct effective military operations near the Chinese mainland. Ensuring an adequate defense and deterrent capability in the face of these trends will require careful consideration of U.S. strategy, procurement priorities, and relations with regional allies.

Much of the discussion about China's military modernization in the United States has focused on new PLA weapon systems. There has been little comparative analysis of Chinese and U.S. military forces and developments — and even less rigorous analysis of how those inventories and systems would perform against each other in a potential conflict or how the balance of relative capabilities has evolved over time.

This brief summarizes RAND Project AIR FORCE analysis that seeks to fill this gap. The research uses a set of "scorecards" to assess the relative capabilities of U.S. and Chinese forces in diverse types of conflict, at varying distances from the Chinese mainland, and at different points in time from 1996 to 2017. Based entirely on open sources, the scorecards provide a basis for deeper public discussion of how the balance of power in Asia has evolved and the challenges the United States can expect to face in the future.

To be clear, the goal is to avoid war, which the authors do not anticipate and which would be disastrous for both China and the United States. The scenarios and the operational activities described here are not meant to signify either the likelihood of a future conflict or the course of events should one occur. Nor do they represent U.S. national or military policy with regard to whether or how such a war would be fought. Rather, this research provides an open-source assessment of trends that could affect U.S. defense and deterrence strategy and establishes a baseline for future analysis.

The core of the analysis is a set of ten scorecards, each addressing relative U.S. and Chinese capabilities in a specific operational area. The scorecards, listed on the left of the figure on the next page, cover the air, maritime, space, cyber, and nuclear domains. To illustrate trends over time, each scorecard examines U.S. and Chinese military capabilities at seven-year intervals, beginning in 1996 (concurrent with the Taiwan Strait Crisis) and projecting out to 2017. To provide insight into the impact of geography, each scorecard considers two plausible scenarios: a Chinese invasion of Taiwan (roughly 160 km from China's coast) and a campaign to occupy the Spratly Islands (centered roughly 960 km from China's coast).

The figure presents the results for each scorecard. The first nine scorecards employ a five-color stoplight approach to depict varying degrees of Chinese or U.S. advantage or a heavily contested environment defined by approximate parity. Advantage, in this context, means that one side is able to achieve its primary objectives in an operationally relevant amount of time, estimated in these scenarios as a period of weeks. For the nuclear scorecard, the results indicate the degree of confidence that each side could reasonably expect to have in the survivability of its second-strike strategic nuclear capability. Because survivability does not necessarily correlate with advantage, no color-coding is used for this scorecard. The report details the sources and analyses underlying each scorecard assessment.[1] 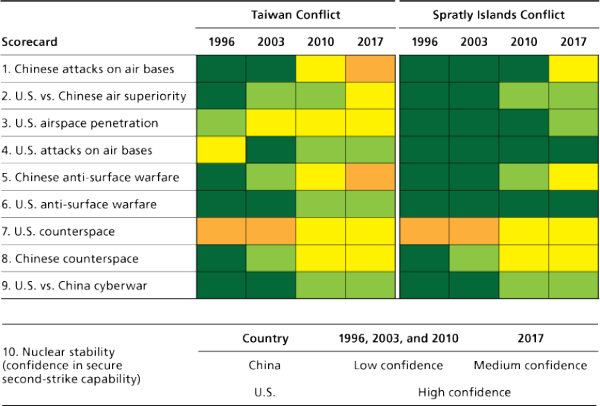 NOTES: To prevail in either Taiwan or the Spratly Islands, China's offensive goals would require it to hold advantages in nearly all operational categories simultaneously. U.S. defensive goals could be achieved by holding the advantage in only a few areas. Nevertheless, China's improved performance could raise costs, lengthen the conflict, and increase risks to the United States.

What Can the United States Do to Mitigate These Trends?

Although the United States will probably not have the resources to prevent all further erosion of the balance of military power, it can adjust its operational concepts, force structure, and diplomacy in ways that will slow the process and limit the impact on deterrence and other U.S. strategic interests. Ideally, it will address these issues in ways that decrease both sides' incentives for preemptive attack and that buttress crisis stability, as well as defense. The following recommendations warrant additional research and analysis: